Excerpt From THE RIDE OF HER LIFE by Tina Donahue 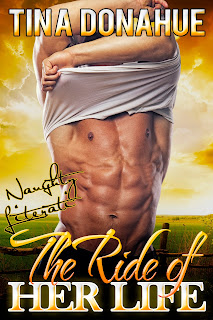 Blurb:
Maddy’s so desperate for fun, she’s signed up for speed dating. Ew. Before she can ditch the event, Ben, her sexy driver, arrives. After one sinfully hot kiss, they’re breaking all the rules, and then some, on a sensuous spring night.

“I signed up for speed dating tonight.”

That was the nicest compliment a man had ever given her. “To meet guys. The ones I know from work, professional organizations, and have run into at bars are married, divorced, cheating, or gay. Some of them hit on several of those notes. I’m not being critical, but I don’t want to get lost in that other stuff.”

“I hear you. Does speed dating actually work?”

“Haven’t a clue. I wasn’t certain whether to pick the fit-and-active group, the one with those who have professional degrees, or the gang limited to those between twenty-five and thirty-six. In the online photos, a lot of them looked much older.”

“Which one did you choose?”

She laughed. “I’m kidding. I went with the professional degree holders. I figured if things didn’t pan out with any of those guys, I’d work my way down the list. After that, I didn’t have a plan.”

“Sure you want to ditch this event? Even if you miss part of what goes on, I should be able to get you there for some of the action.”

“Don’t worry about it. I’m fine.” Better than she’d been in ages, enjoying this and him.

His smile said he wasn’t having a bad time either. He scanned the channels, stopping on Adele’s Hello. “This okay?”

In more ways than he could imagine. “Why?”

She hadn’t had an appetite all day, dreading the fiasco tonight. “I could eat.”
“I don’t have much.” He pulled a huge M&Ms bag from the glove compartment. “You’re welcome to this.”

“Only if you join me. I’m a chocoholic. I’ve learned not to indulge alone.”

His dimples deepened. “I’ll protect you from yourself.”

They chomped happily, content in their comfortable silence, the world around them gone crazy. Sirens, shouts, blaring horns, police bellowing orders added to the cacophony. A treat slipped from her hand.

With surprising speed, Ben caught it. “Here you go.” He slipped the candy between her lips.

Her mouth went dry, blood thundering in her ears. Ignoring the M&M, she tongued his finger. Tasted better than the chocolate. His lashes were impossibly dark and long, his lime scent tinged with musk. The last time she’d looked, his bulge had been more pronounced than before. “Thanks.”

If he noticed how breathless she sounded, he didn’t say, thumbing her bottom lip instead. “You have some chocolate….”

Maddy moved into him, Ben did the same with her, their mouths molded together, his tongue slipping inside, filling, thrilling. This was the craziest thing she’d ever done in her staid life, and it felt so damn right. Eight months she’d gone without sex. Even more time had passed since a guy had simply hugged her.