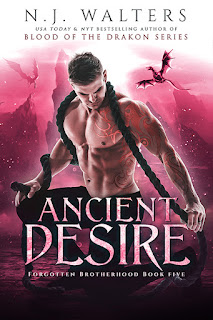 Nothing was supposed to wake half dragon, half human Lucius from his Deep Sleep. Nothing. And yet something, or rather someone has. The unexpectedly attractive human not only touched him. She kissed him. Now Lucius is awake, and more powerful than he has ever been in his 4,000 years of existence. And once he finds out who led her to his cave, he’ll deal with his 300 years of hunger…

College professor Raine Carson spent her life obsessed with myths and legends. And now she’s woken one up. Only, Lucius is nothing like anything she’s ever seen or read about in her history books. Because this man is part sexy badass and part terrifying…monster. Yet she wants him with a hunger like nothing she’s ever felt before.

Lucius used to be part of the Forgotten Brotherhood—a ruthless group of paranormal assassins. Now he’s unsure if his former Brothers are their allies…or enemies. All he knows is that someone is hunting him, and Raine is just as tangled up in this mess as he is. And he’ll protect her—even if it means unleashing his Dragon and all of its power.

She jerked the light back up, illuminating the random tattoos on the other side of his body. There were many, but nothing like the cohesive one on his left side. He was biker gang meets ancient god.

His jaw appeared to have been hewn from solid granite. Dark brown hair fell like silk to his wide shoulders. His cheekbones were high, his nose perfection. But it was the eyes that caught her. They were pink.