Salvation Pack: The Next Generation is Back!

WOLF CLAIMS HIS PACK, the next installment in the Salvation Pack: The Next Generation series by N.J. Walters, is here. 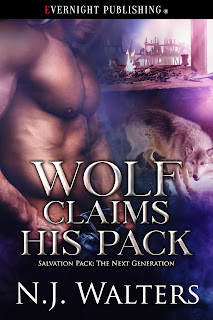 Wolf Claims His Pack Salvation Pack: The Next Generation, Book 3

Half-breed wolf and blacksmith, Bailey Smith’s life is complicated. She’s alpha of a small pack consisting of her teenage brother and three other kids. Her grandfather—a pure-blood wolf—wants her and her brother dead. And now a confrontation with two human males has brought Child Protective Services to her door. If that wasn’t enough, she’s caught the attention of an unknown, sexy-as-hell, male wolf.

Nicholas LaForge has found his mate and purpose. Being a full-blooded wolf is a strike against him, but she marries him to protect her kids. He’ll use whatever sneaky methods necessary—including sex—to convince her they belong together. First, he has to deal with the threats to his new pack. That’s the easy part. Winning her love and trust might be impossible.

The LaForge men were always large wolves. They healed quicker than most and were damn hard to kill. It gave them an edge. Made them dangerous. 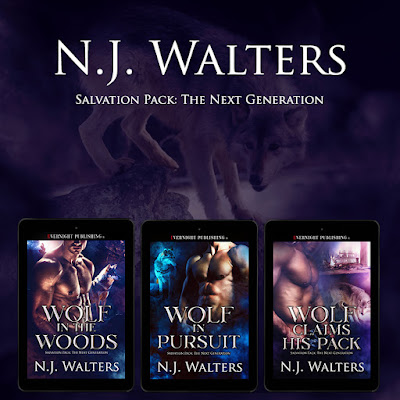 N.J. Walters is a New York Times and USA Today bestselling author who has always been a voracious reader, and now she spends her days writing novels of her own. Vampires, werewolves, dragons, assassins, time-travelers, seductive handymen, and next-door neighbors with smoldering good looks—all vie for her attention. It’s a tough life, but someone’s got to live it.