Excerpt From BLAST FROM THE PAST by Katherine Kingston 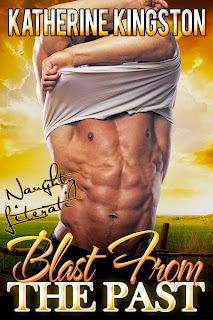 Blurb:
Lynn’s past relationship with Ryan wasn’t healthy, but when she meets him again after a long separation the old flames reignite. Can they have a more mature relationship now?


Lynn’s feet hurt and her back ached, but she still had two hours left on her eight-hour shift. She longed to go home and soak in the tub, but they had a substantial crowd that night and she needed every penny she could make. A big business conference in the hotel meant lots of expense account dinners and good tips.

Marion, the hostess, had just seated a group of two women and four men at table twenty-four. Despite her exhaustion, Lynn pasted on a smile and pushed down her discomfort as she approached them. A cheerful smile and perky attitude always improved the tips, though a group this size tripped the automatic gratuity. “Hi, I’m Lynn, and I’ll be your server this evening.” It came out okay, but she caught hints of tiredness in her words. “What can I get you to drink?” She pulled the pad from her pocket as she glanced around the table.

She took a minute to recognize the man in the middle chair on the left, but she almost gasped and dropped the pad when she did. She caught the reaction just in time. He couldn’t be the same man. And if he were, surely he wouldn’t recognize her. She’d cut her hair into a short bob and let it revert to its natural dirty blond color. Besides, no one she’d ever known would expect to see her in these circumstances.

“Can we see the wine list?” one of the men asked.

She nodded absently, because the man she couldn’t believe was there was staring at her. His expression suggested he knew but couldn’t quite believe what he was seeing.

She drew a deep breath and handed the wine list to the man in the corner.

“I’ll have a water, please.” That was the older of the two women.

A couple of them nodded.

“I’ll give you a minute to look over the menus while I get the waters.”

She turned away and breathed a quick sigh. How could this have happened? What were the odds that Ryan Harper would ever walk into the place she worked in Baltimore? A man who lived hundreds of miles away. Dear heaven. Fate hadn’t been hard enough on her already?

Would he believe it was her? Ten years ago, they’d known each other very well, had even talked about getting married, until her parents had driven him away. She hadn’t seen him since the day she’d refused to elope with him, though she’d spent many sleepless nights wondering how her life might have turned out if she had.

All that was irrelevant now. She collected the pitcher of water and, steeling herself not to react to his presence, went back and filled each glass. Her hand didn’t shake at all. It helped not to look directly at him. “Are you ready to order?” she asked the table.

The man at the far side tapped the wine list, forcing her to circle the table and lean over between him and Ryan. “Can we get a bottle of this?”