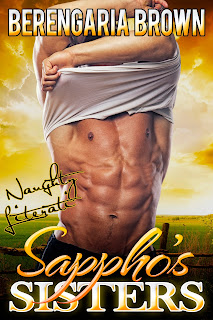 Blurb:
Lady Eustacia Lumley, the only child of the Earl of Wentworth, must marry well and ensure the succession. Only problem is she’s falling in love with another woman.


That evening, the women settled into a comfortable sofa in front of the fire in the yellow sitting room at Green Meadows with their embroidery.

“It’s good to be home again,” said Eustacia. “I like the hustle and bustle of Town, and shopping and parties are always fun, but I prefer to come home and sleep in my own bed.”

“Thank you once again for inviting me to stay with you for three months. Poor Papa is at his wits’ end wondering what to do about us all. Now that I’ve turned eighteen, he’s suddenly realized that Anne is very nearly twenty-two and time is running out to find her a good husband.”

“Four children in four years. Ugh. That’s one aspect of marriage I have never accepted—a baby every year.”

“No. I find that concept unappealing too. In fact, I find most men unappealing—selfish, arrogant, and quite often, silly. So many of the notables I danced with at Almack’s could not think past their clothes and their horses. They all either owned, or would inherit, property. Shouldn’t they be thinking about their lands and the needs of their tenants? Papa is always concerned about the lives of his parishioners.”

“Maybe they thought they shouldn’t talk about such things with a young woman.”

“Possibly.” Margaret did not sound convinced.

“Do you not want a husband and children of your own?”

“What I want is irrelevant. Papa can’t keep supporting us all, and what else is there for a woman who’s noble-born but impoverished? I’ve thought seriously about becoming a teacher or governess, but families wanting a governess usually also have sons, so they won’t hire a young woman like me. I could be a companion to an old lady. I can sing, and draw, and sew, as well as speak passable French. But I suspect agreeable old ladies wanting a companion are few and far between, and I’m much more likely to end up with a most disagreeable old lady.”

They both laughed, and then turned the conversation to happier topics.

Much later that evening, Eustacia noticed Margaret screwing up her eyes and frowning. “What’s wrong, Margaret?”

“I have the headache. I seem to get it more and more often these evenings. I don’t understand why. The light here is good for sewing, much better than at home. Good wax candles are so much more expensive than tallow,” she said and sighed.

“It’s almost time to go up to our chambers anyway. Would you like me to come and massage your head? My nurse used to massage mine and it really helps.”

“Yes, thank you. That would be nice.”

They put away their embroidery and walked companionably up the stairs together. Eustacia’s maid was waiting for her and soon Eustacia was in her night rail and robe, her hair brushed out. She dismissed the maid before walking down the hall to Margaret’s room. Margaret, who had no maid, was just tying her robe.

“Sit at your dressing table and let me undo your hair,” Eustacia said.

Slowly, she pulled out the pins and untwisted the braid. Margaret’s long, shiny brown hair rippled across her shoulders and down her back. Eustacia picked up Margaret’s hairbrush and drew it through the thick, wavy hair, pulling carefully and steadily from root to end in smooth sweeps.

“That does feel good. I can remember when my nanny used to brush my hair. I always enjoyed it.”

“I want you to enjoy this, too,” Eustacia whispered, letting her hot breath tickle Margaret’s left ear as she kept up the smooth strokes with the hairbrush. From front to back, from root to tip, Eustacia drew the brush through the hair in firm but gently soothing sweeps.

Margaret’s eyes closed and her shoulders relaxed some of their tension.

By the time she’d finished, she could tell Margaret was much more relaxed, her shoulders no longer tense, her brow no longer furrowed.

Eustacia bent and pressed her lips to Margaret’s still-exposed neck, kissing it with soft, light, butterfly kisses from left to right across her neck, ending at her right ear, which she gently sucked into her mouth and nibbled on. Eustacia blew into that ear, then began to kiss her way across to the other side and repeated her caress on the other ear.

Eustacia let her hands rest on Margaret’s shoulders, rubbing them softly, then more firmly, soothing and stroking down to the elbows, and then back up again.

Eustacia rested her palms on Margaret’s sides, and when Margaret made no move to complain, she ran them up to cup the younger woman’s breasts. Margaret’s nipples were hard little points under the soft velvet of her robe. Eustacia pushed the robe apart so she could touch Margaret’s breasts through the thin linen of her night rail. The breasts were full and round, her nipples now engorged, and just touching them made cream seep from Eustacia’s cunny.

“Take off your night rail. Let me see you naked.”