Excerpt From RENAISSANCE by Alexa Silver 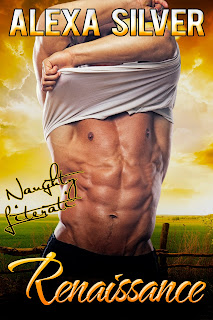 Blurb:
Kira meets Sage, one of the guys from her favorite band, at a "rock workshop". Can she trust this handsome rockstar or is he after more than her talent?

“How to be a rock star. They make it sound so easy.” Kira McGrath looked at the poster and tried not to fidget. The Fantasy Rock World camp had been a dream of hers for ages, and now that the pre-camp registration day was here, she was a nervous wreck. Hotel check in had been fine, but she was at the end of a long line of music fans now and she was having serious second thoughts. She could go home, sure, but that would be admitting defeat and Kira was not about to fail.

“Oh my God,” the woman in front of her said. “I cannot believe Joe Clinton will be here. He’s like, the best.” She grabbed Kira’s arm, her purple fingernails digging into Kira’s black leather scuba jacket. “Isn’t he the best?”

“I guess,” Kira said, shrugging. She wasn’t a fan of Joe, who was the latest and greatest heavy metal shredder. She was more old school. Give her Clapton and Stevie Ray Vaughn.

“Kira.” She extended her hand, shaking Brenda’s. “I’m here for the songwriting track.”

“Oh yeah.” Brenda’s eyes drifted back to the poster, where Novell Vinge’s name was blacked out and a TBD had been hastily added in red marker. “I wonder who is replacing Novell. That sucks; he’s a great songwriter.”

“Yeah.” Kira had been excited at the idea of doing a week of workshops with the fifty-something music legend, who’d written more than two dozen top ten hits. But Novell had broken his arm badly and rumor had it he was in surgery. Nobody knew yet who would be replacing him, though names of potential counselors abounded. Paul McCartney and Elton John would be incredible, but that so wasn’t going to happen. Personally, Kira was hoping for someone from one of her favorite bands, but that was impossible. Nocturnal Lions were in Europe, Enigma was in Asia, and Synergy was recording in New York.

“Do you play?” Brenda asked, motioning to her guitar case. Kira couldn’t fathom why Brenda and many others in line brought their music cases to registration. They’d just sign in here, not play. Not yet, though there was a rumor that there would be an open jam session tonight.

“A little,” Kira allowed. “Guitar and keys. And I sing some too.”

“Ohh!” Brenda’s expression turned calculating. “We should try to play together. Do you play much?”

Kira shrugged. Though she’d been expecting this, she hadn’t worked out what her response would be. “Yeah, my band works steadily.”

“You a local?” the guy in front of Brenda, with spiky blond hair and more facial hardware than the average home improvement store, asked. “You look familiar.”

“What’s your— The Cats! The Cats by Day!” the guy exclaimed and Kira’s face went hot. Shit. She didn’t need this at all, much less as she started at the camp. The guy turned to Brenda. “They’re a tribute band. They do a lot of Nocturnal Lions stuff. Check them out on You Tube.” The guy’s eyes narrowed and Kira knew she was being measured.

“What?” she asked, trying to stay calm and keep her irritation out of her voice.

“Why are you taking a spot from one of us?” he asked, sounding every bit like a petulant child.

Kira had to work hard not to roll her eyes at that. She’d learned, the hard way, that a lot of men in the music industry didn’t grow up, and she was sick and tired of the posturing that belonged on a middle-school playground. “I’m doing the songwriting program, not the performance. And I didn’t take a spot from anyone. We all applied, paid our fees, and are here.”

Brenda gasped. “Don’t be an asshole.” Dismissing him, she turned her attention to Kira. “You’re good. Ignore him, he’s just being an insecure jerk. Let’s talk later.” She squeezed Kira’s arm, her expression open and welcoming.

“Sounds good,” Kira murmured, wondering if she should get out of line, pack her bags, and request a refund. Maybe she really didn’t belong here.