Authors are asked all the time - "Where do you get your ideas?" For me, a spark for a story can come from anywhere. An image of a character, a setting, an overheard conversation, a scene from a movie or another book, a song, a dream, a trip to an exotic place, or just a random idea from nowhere. In RED TAPE, Book 1 in the FLC Case Files series, I know exactly where the idea came from. I heard one line: “Bondage in the White House.”

Dh thought for a moment, had a sip of wine, and said. “If you want it edgy how about, Bondage in the White House. There’s lots of scandal you could write there.” We were watching the TV series Scandal at the time and Fifty Shades of Grey hadn’t been released yet.

I considered that for a moment. And the warped, kinky mind of mine started turning that phrase over. “I think I can work with that.” Red Tape was created and the First Ladies Club, a secret organization that the first lady runs and past first ladies have run since President Lincoln.

When normal negotiation fail between political powers, the FLC steps in and uses sex scandal, murder and more to manipulate foreign or domestic policies. In Red Tape, sex scandals are used to manipulate a sadistic leader from a foreign country. But he discovers their plan and devises a dangerous game of his own. And the heroine is caught in the middle. 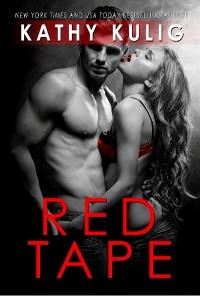 Excerpt: (Intro to the following excerpt: Ex-CIA agent Zoe, starts her new job in the White House. Her office is in an old storeroom in the basement of the West Wing. Security concerns and old CIA habits brings her to another room down the hall late one night. There she runs into Jason, ex-lover and ex-partner when she was in the CIA. He’s hired to train her for a new undercover position. But the room she’s in, is off limits and about to be used for an ops.)

Footsteps approached down the hall. “Shit, too late,” he said as he closed the inside door. The room swallowed them in utter blackness. Zoe held up her cell phone for light. Jason flicked on a penlight.

“In here,” he ordered. He grabbed her arm and shoved her into a small storage closet, then closed the door. Her cell buzzed. “Phone off.”

Zoe glanced at her phone and let out a sigh as she turned it off. “Thank God.”

“It’s Damien.” Zoe let out a breath. She hated when her brother was late, even when he was beating the crap out of her in the Words With Friends game.

She nodded, her eyes adjusting to the dim lighting.

“Okay. What’s happening?” As much as she wanted to be angry at him, her stomach fluttered with excitement and her sex throbbed. He always managed to turn her on, especially when they were in danger. He smelled so good, too. A new shampoo, body wash? Whatever it was, it made her remember so many scorching-hot nights, breathless from hours of fucking. She wanted him again, wanted him now.

He took the phone, made sure it was off and stuffed it in his pocket. His penlight was still on. “Now listen to me. We cannot leave this closet or make a sound until it’s over, under any circumstances. Do you understand?” His frown grew fierce and his eyes wild.

He cupped her chin with his hand. His mouth was close to hers as he whispered, “I’m sorry, Zoe. I should’ve called, should’ve explained.” He squeezed his eyes closed then looked at her again.

“Trust you? But I don’t know what the hell is going on.”

She knew that tone, knew him well enough not to argue. Trust wasn’t always easy for her.
“No sound.” He turned off the penlight.

She leaned against the wall, listening. A rush of adrenaline surged through her. The sound of her heartbeat pounded in her ears. Like old times on a mission together. The doorknob to the room rattled. Then the door squeaked open, and a sharp click of the light switch sent a shudder of excitement through her. The sound of people entered the room. Zoe tried to estimate the number. At least three, maybe more. Women and men by the voices and heeled shoes. She gasped but only a whisper. He placed a hand over her mouth, and she nodded. She held her breath.

“Anything you need before the room is sealed?” a male’s voice asked.

“No, we’re good. Seal it.” Was that the first lady? Slowly, Zoe’s eyes adjusted to the darkness, and a sliver of light appeared beneath the door. Another sliver of light cut through the door and frame where the old wood had warped. Angling her head just so, she squinted through the crack, trying to get a fix on the outside room. As they moved around, four people came into view, two men and two women.

Good, God, one woman wore leather fetish wear—a corset, thigh-high boots and stockings. And the other with blond hair wore a black scholar robe. Beneath the robe she wore five-inch heels. Their faces were covered with elaborately decorated Mardi Gras masks. Two men were also present. One young guy with a muscular build was dressed in a black T-shirt, tight pants and wore a leather face mask. Between the robes and the guy all in black, the scene had a Gothic, macabre feel. What kind of rendezvous was this?

The older man wore business clothes. He was the only one without a mask. When he turned, Zoe thought he looked familiar. He was a small man, middle-aged and not very attractive. By his smile, he appeared to be enjoying the encounter. Zoe studied the furnishings now that the room was lit. Shit. This wasn’t an interrogation room. It was a kinky-sex dungeon. Under normal circumstances she’d have been laughing. This wasn’t funny. This was the White House.
Posted by Kathy Kulig at 1:00 AM