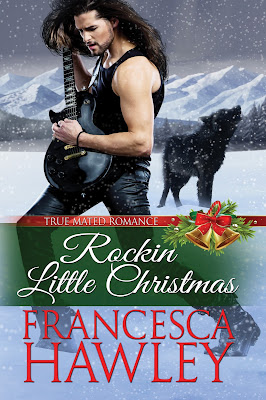 When her parents’ rock band The Pack performs at a local bar, Mandy discovers her True Mate, Joe Blackwolf, the band’s lead singer and guitarist. All she has to do now is convince Joe that she told a little white lie to make her mom happy, her father that rock musicians aren’t all alike, and her new mate’s family that rockers aren’t all that different from classical musicians.
Joe Blackwolf is celebrating his fortieth birthday. And what he wishes for when he blows out the candles is to find his True Mate. He succeeds when he meets Mandy Goldwolf. Problem is…he thinks she belongs to someone else. Finding out the truth leaves him free to explore every inch of her smokin’ hot curves, but now Joe and Mandy are neck deep in overbearing relatives and everyone is in for a Rockin’ Little Christmas.


Note:  This book was previously published elsewhere but has been revised and updated. Former title was Cupid Rocks.


By reading any further, you are stating that you are at least 18 years of age. If you are under the age of 18, please exit this site.

“Am I dead, angel? Cause you look like you’re straight from heaven.”

“That has to be the worst line I’ve ever heard,” Mandy laughed, looking up into warm brown eyes. She shivered as he settled into the chair beside her.

Joe waved over a waiter and ordered for them without once releasing her hand. She could feel the rough calluses guitar playing had created on his fingers, but they turned her on. He turned her on.
This was Joe? “Good ole Joe” as Eddie called him. He was neither good nor old. No. He was gorgeous…and talented. Zach wasn’t kidding when he’d said this Blackwolf was a great guitarist and singer. For the first time since Carly bugged her, she wished with all her might she hadn’t lied about Zach being her mate. Zach might be handsome, but Joe made her throb in places that hadn’t throbbed in all of her thirty-five years.

“So what’s with the camera, angel? Fan or reporter?”

Mandy looked down at her fingers clenched around her camera strap. If she told him who she was, he’d back off so fast she’d see skid marks on the floor. Just this once she wanted to pretend she was someone else. Just tonight. She leaned forward, pressing her lips against his ear.

He shuddered, turning his head he met her gaze. The fire glowing in his eyes set her boiling. Yes. She had to have him. Now.

“A groupie? For just any rock musician?”

“Fuck, yeah,” he growled, standing so abruptly his chair toppled over. No one nearby noticed as he dragged her to her feet. “Where?”

Mandy looked over toward the hallway leading to Zach’s office. They had a clear path. She pulled him after her and they ducked into the shadowy space. He pressed her to the wall and took her mouth in a deep kiss. Their mouths meshed together. Joe pulled back to nip at her lips, then ran his tongue along the inside edge of her lower lip. She caught his long dark hair in her fingers, holding his mouth to hers.

Fire. Heat. She’d never felt anything like this in her entire life. She moaned as his mouth slid to nuzzle her neck. Mandy wrapped her free arm around him, clutching his leather jacket. She lifted her right leg along his hip. He stepped into the opening she’d created, thrusting his hips against hers.
She shivered as his rough fingers slid under her skirt to cup her ass. He pulled her more firmly against his hard cock then reached up to her peasant top, untying the drawstring to bare her bra covered breast. His hot breath teased her neck and then his warm tongue licked along the curves of her neck and breasts.

“Hey. Anyone seen Joe?” Mandy and Joe froze as she heard Eddie’s voice. He was close. Too close.
She looked in the direction of the entrance to the hallway. She didn’t see him, but he was right there. She knew it. Mandy closed her eyes, fighting to keep her panting excitement from giving them away.

“I think I saw him with a hot chick earlier. I didn’t get a good look at her though. Just noticed she was his type,” Tom responded with a laugh.

Joe groaned in her ear and kissed her cheek. She turned to look up at him. He was still on fire—she could see it—but there was a definite question in his dark eyes. Stop or go?

She lowered her leg and he sighed, then she smiled and grabbed his hand. “This way,” she whispered.
Mandy knew there was an empty unlocked office back here and she wanted this wolf and she wanted him now. He chuckled as they moved into the darkness. She found the door on the right and turned the knob. Hearing the click, she pushed, wincing at the creak when the door stuck. He pushed her through and they shut and locked the door behind them. Mandy flipped the light switch, blinking a bit to adjust to the table lamps that came on. She’d been expecting an overhead.

Joe pulled her over to the empty desk and she climbed up onto it. He stroked her cheek. “You’re sure?”

Posted by Francesca Hawley at 4:30 AM