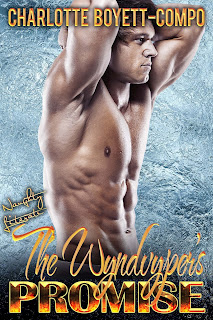 Blurb:
Audriana Lansing has fled her overbearing family and made a life for herself, until she gets trapped between bounty hunters searching for her and an old flame who doesn’t believe in forgive and forget.


He lay on his side with his head propped in his hand. His sisters and their friend were playing some kind of card game and squealing when certain cards were laid on the blanket upon which they sat. Every now and then they would glance over at him and giggle. Their friend would blush then they would begin whispering again. They amused him—up to a point—but the incessant squealing was beginning to give him a headache. Dismissing them, he turned to his back with his hands crossed under his head and stared up at the trembling branches of the josia tree spread out above him.

He hadn’t wanted to accompany his two sisters and their friend to the park, but his mother had insisted. His buddies were no doubt guzzling beer and chasing girls down at the quarry while he was doing babysitting duty. It was high summer, he was seventeen with his hormones raging, and he was restless. Not even the lovely face and form of his sisters’ friend helped alleviate the boredom.

Closing his eyes, he tried to block out the inane chatter and the annoying squeals but when all that suddenly stopped in mid-peep, he popped open an eye and turned his head toward their blanket. They all stared across the greensward at something that had captured their undivided attention. Craning his neck, he looked that way, too, and as soon as he saw the two tall warriors in crimson uniforms, he shot up.

“Naomi, Dayna!” he snapped at his sisters. “Stop gawking at them!”

“I know her,” his sisters’ friend said and hopped to her feet. She waved her arm over her head. “Audriana! Over here!”

“Hush!” he hissed and scrambled to his feet. “Don’t draw attention to yourself, girl!”

“But I know her,” the girl whose name he couldn’t recall protested. “She’s a friend.”

“Aye!” the girl standing with him said and before he could stop her, she started running toward the two warriors who came to an abrupt stop with their hands on the scimitars strapped to their hips. Sava also stopped where she was with an anxious look on her face.

“It’s all right,” a young woman dressed in the finery of the royal house told the warriors. “She’s a friend.”

“But the others are zafyr, princess,” one of the guards stated. “He is a Kasda.”

Being called unclean by the guards rankled but he knew better than to open his mouth to protest the insult. The warriors were glaring at him as he stood beside his sisters. Hatred and disgust had turned their black eyes as hard as obsidian. He did not miss the flexing of their fingers on the grips of their weapons. From the way they were looking at him, it was evident they hoped he would start something. The contempt blasting from their cold glowers said they considered him no threat and that he was lower in their sight than offal they might find under the soles of their boots.

“Nonsense,” the princess said with a flick of her wrist. “If they are friends of Sava, they will be friends of mine.” She started between the warriors but they blocked her path.

“Not until the male leaves,” the warrior told her.

“Sava, who is the male?” the princess inquired, turning her gaze to him.

“He is Asher Weil,” Sava replied. “Brother of my friends Naomi and Dayna.”

He could not take his eyes from the princess. She was the most beautiful female he had ever seen. Her long black hair was braided and hung over her shoulder like silken cord. In the dark gold gown of her station, her body was lush and flowed in gentle curves that beckoned his hands to follow. Looking at her, he lost his heart as easily as he would lose his head should he dare say one word to her.

“Is the brother of your friends in the Levitik military?” the princess inquired. She was observing him just as steadily as he was watching her.

“No, he isn’t,” Sava said and he wondered how she knew he wasn’t. One quick glance at his sister Naomi gave him the answer. There was probably nothing about him their friend didn’t know.

Which rankled on one hand and amused him on the other.

“Then he may stay where he is, Jamael,” the princess instructed the warrior.

Who was none too pleased by her words. His lips skinned back from his teeth but he bowed in acknowledgment of her command. For a moment he thought the warrior would continue to block the princess from joining Sava but the tall man stepped aside.

“Sit your rump down, boy, and stay where you are,” the warrior commanded him. Once more his fingers caressed the grip of his sword.

He had no choice but to lower himself to the ground. He sat with his knees drawn up into the circle of his arms, careful not to let his face show the fury that was piercing his heart.

The princess stepped forward to kiss Sava on both cheeks then hooked her arm through hers. “Come. Introduce me to your friends. What is it you were doing?”

“Reading the cards!” Sava said with enthusiasm. “Telling our futures.”

“Oh, what fun,” the princess said.

He watched the elegant beauty greet his sisters then sink gracefully to the blanket. As he stared in open-mouthed wonder, his sister Dayna scooped up the cards, shuffled them then laid the deck on the blanket for the princess to cut.

“What would you like to know, Your Highness?” Dayna asked as the princess cut the deck.

“The man who will be my husband, of course,” the princess replied and the four young women giggled.