Excerpt from Her Gargoyle Guardian by Katherine Kingston 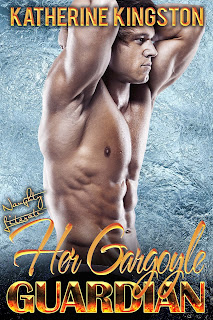 Blurb:
Ginny decides to pursue a relationship with Ben despite the risks to her heart. She can cope with his claim that he’s a shape-shifting gargoyle, but his warning that they will have pnly a short time together, gives her pause.

Excerpt:
The part of Washington, D.C. where Ginny lived, in the shadow of the national cathedral, got quieter at night, but never completely silent. Traffic sounds, a constant buzz, mixed with the occasional distant roar of an airplane or clatter of a train to form a white noise backdrop to her quick walk from the bus stop to the apartment she rented in an older house. Getting home late in the evening was one of the downsides of her second-shift job at the hospital. Once she could afford a car, it wouldn’t be a problem, but she still had student loans to pay off.

Moments after she got off the bus, the other sound was there as well. For the past several weeks, she’d been noticing an odd noise as she headed for home. If she didn’t know better, she’d swear it was the sound of wings flapping. Whenever she turned to look, though, she didn’t see anything or anyone there. It added to her uneasiness on the walk.

When trouble did come that night in late fall, though, it hit her from a different direction entirely. As she turned a corner, an older man in a ragged trench coat reached forward from the wall he leaned against and snagged a hand around the strap of her shoulder bag, yanking it toward him. Ginny wrapped her wrist around the strap and wrestled him for it. At the same time she fought her reaction to the miasma of fumes surrounding the purse snatcher, a ghastly mix of alcohol breath and unwashed body. Nothing she hadn’t smelled before at the hospital, but at least there she could don a mask.

The guy was surprisingly strong and she was losing the tug-of-war for her purse when a new party entered the fray. A tall dark figure did a karate-type chop on the purse-snatcher’s arm causing him to howl and let go of the strap. Ginny rocked backward but found her balance.

“Never again,” the newcomer growled in a deep, gravelly voice that didn’t need much enhancement to sound menacing. “Never again attack a woman. Or anyone. No stealing.” Ginny shivered, though the words weren’t directed at her.

“I won’t,” the purse-snatcher stammered. “Promise I won’t. Think my arm’s broken.” He cradled it against his body.

Ginny sighed and approached him, steeling herself against the smell. “Don’t touch my bag again. Let me feel your arm. I’m a nurse.”

Trembling, he held it out to her. She ran her fingers over a very thin arm from wrist to elbow and stopped when he cried out in pain. She pulled her cell phone from the bag and called 9-1-1, explained that she’d found an older man on the sidewalk who seemed to have a broken arm. They promised to send an ambulance.

“I’ll wait here with you,” she told the old man. Her rescuer, a very tall figure wearing a dark, enveloping cloak and a ball cap with a long bill pulled down low over his face to hide his features, hadn’t said another word, but he stayed close by.

To pass the time and distract the man from his pain, she asked, “Why did you try to take my bag?”

He took a long time to answer. “Need money. Hungry. And thirsty. Know it’s wrong, but the urge just took me.”

“And now you have a broken arm as a result. There are easier ways.”

Ginny sighed and fumbled in her bag. She took out a ten dollar bill and handed it to the man as a siren wailed in the distance. “After they treat you get some food.” The screech grew rapidly closer, until the ambulance stopped beside them and the medics jumped out. After some checking of vital signs and condition, they put a splint on the arm and loaded the man into their truck to take to the hospital.

Her rescuer had hung back in the shadows while the medics were there, but once they departed he came to her again.

“You took care of him and gave him money even though he tried to rob you. Why?” he asked bluntly.

“He’s a poor, sick old man. It was wrong to try to steal, but he’s paying a stiff price for it. I feel sorry for him.”

The stranger made no reply to that directly, but moved with her when she turned toward home. “I’ll stay with you until you get to your house.”

“Thank you. I appreciate it.” His cloak flapped in the gentle breeze. “It’s been you. I’ve thought someone has been following me from the bus stop to the house for the last few weeks. Who are you? Why are you doing that?”

“Guard people? Not just me?”