Excerpt from My Wish Come True by Tina Donahue 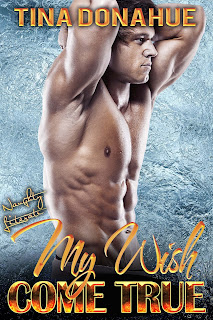 Baby, it’s hot inside…
For Laurel, Christmas so sucks. She’s out of a job, money, and luck until her neighbor Scott plays Santa. This tall, dark, and sexy hunk delivers sweet decadence and holiday magic that makes being bad oh-so good.

Someone shrieked, paused, and wailed again.

She winced and forced one eye open. Crumbs decorated her kitchen table, along with chocolate smears from cookies she couldn’t bake. Depressed by the season and her current circumstances, she’d gobbled the remaining raw dough. A bad move according to the CDC or some other government agency that warned against salmonella, E-coli, Ebola, or a disease-of-the-week. Just what she didn’t need.

Like the Energizer Bunny the damn noise kept going and…

Her oven belched smoke worse than an active volcano, her cookies burnt to ash. The smoke alarm hit it highest note and stayed there, loud enough to break her eardrums.

“Hey!” A deep male voice in the hall cut through the racket.

Couldn’t be her neighbor Scott Quinn. With the other tenants gone for the holiday, she’d hoped to corner him at last and impress him with her awesome baking skills.

A fist pounded on her front door. “You okay in there?”

She was light-years from all right. Moving to Boulder had been a huge mistake despite the supposed job opportunities and men outnumbering women by an awesome margin. Neither situation had worked for her, and now this. It was him. She’d recognize his rumbling baritone anywhere.

He didn’t even know her name. She hadn’t combed her hair. Wasn’t wearing makeup. This couldn’t get worse. “Yeah, I’m—” She coughed and turned off the oven.

He knocked hard enough to rattle her teeth.

Before he called 911, she slapped on a smile and swung her front door open.

He peered over her head into her crappy studio apartment. An easy task given his height. At least six-three, he had broad shoulders, narrow hips, long legs, and a super impressive bulge behind his jeans fly. Stuff that fueled female wet dreams.

Scott batted away smoke. “Where is it?” He shouldered past her, an extinguisher in hand.

“What? You mean fire? There isn’t one. It’s my oven. I turned it off. My cookies burned. No biggie. Everything’s cool.”

The screaming alarm contradicted her.

He flicked on the oven fan and checked the appliance. “You need fresh air in here to get rid of the…” He stopped at her window caked with ice. Snow came down in huge, wet flakes.

According to weather.com, Boulder hadn’t experienced a winter this cold in decades. Lucky her. “I’m afraid you can’t open that. It’s frozen shut.”

He rubbed his arm.

Laurel bet his skin goose-pimpled beneath his gray Henley. She would’ve sold her soul to snuggle close and get him warm.

“Don’t you find it cold in here?” He checked her thermostat and whistled. “It’s only fifty-two degrees.”

Before she’d turned on her oven, the temperature had dipped to the upper forties. “Can’t be winter forever, right?” She forced a laugh.

Black hair skimmed his forehead and curled around his ears and neck, a just-got-out-of-bed look that made her blood race. Same as his stubble. By her guestimate, he had testosterone to spare and couldn’t be more than thirty.

He tapped her thermostat. “Your heat’s off.”

Smart and gorgeous. No guy deserved eyes that blue. And his lashes… Even with mascara, she’d never made hers so dark and long. “Uh-huh.”

“Is the unit broken? Did you call the manager?” Scott frowned. “Did that jerk give you grief? He whined like a two-year-old when I needed my kitchen lights replaced.” He raised his handsome face to the fixture. Off. The only light source was the small bulb above her oven and what illumination spilled in from the hall. “Want me to talk to him about getting this stuff fixed?”

Scott regarded her oven mitts and ensemble. Boots, several fleece sweats that made her thighs even bigger, and a puffy parka that gave her a bod like the Michelin man.

The four sweatshirts she wore beneath her coat didn’t help. “This isn’t his fault. I’m sure the heat and lights work fine. I don’t turn them on. Actually, I can’t.”

This wasn’t how Laurel envisioned their first conversation, Scott cocking one eyebrow at her as he would someone seriously nuts. She shrugged and tried to act upbeat. “I kind of—”

The alarm sputtered, gave one last painful wail and cut off.

She sagged. “Finally, huh? My ears were about to bleed.”

“Mine too. What were you saying?”

By now, most guys would have fled with their extinguishers, grateful she hadn’t caused a blaze that threatened their digs. Scott’s interest and possible concern surprised and dismayed her. Laurel didn’t want his pity. “Nothing really. That is, I wasn’t saying anything important. I lost my job, that’s all. I wasn’t fired for cause. They loved me. Just not enough. I was outsourced or maybe insourced. I’m not sure what you’d call what happened to me. They found someone else or rather something else that was way cheaper than my salary and benefits. Not that my medical and earned time off were great or that I made a fortune there. But money’s money, huh? At this point, I’ll take anything. Even Walmart hasn’t called back. Been a tough few months. After Christmas though, things should look up.”

She wasn’t making sense. Heat burned her cheeks. The warmest she’d been in days. “Yeah. I’m embarrassed to say a computer replaced me.”

“You were in customer service?”

“I wish. I’d probably still be working. I compiled information from various sources and wrote news articles for our clients.”

“Not there I wasn’t. I mean, I didn’t do reporting. Simply pulled facts together and wrote stuff I thought was interesting. Management said the computer did it faster and better. Go figure. However, I do have a communications degree and the crushing student debt that goes with it. Life is good.” She bared her teeth in what she hoped was a smile. “By the way, I’m Laurel Austen.”

“Scott Quinn.” He put out his hand.

She fumbled with her oven mitt and finally used her teeth to pull it off. Beneath it she wore her Hello Kitty mitten. “Nice to meet you.”

His firm grip weakened her knees. His dimple stroked her soul.

“I know this is your call, but you shouldn’t stay in here. Too smoky and cold. I have breathable air and heat at my place.” He gestured to his apartment across the hall. “Happy to share both with you.”

Even if she’d been drowning, his offer would have been more welcomed than air. Still, she held back. “I don’t want to intrude on your plans.”

“You haven’t.” He opened his door.

Unlike her studio, he had a one-bedroom. Lucky guy. He didn’t have to sleep on a pull-out sofa, his face inches from the fridge. A faint lime scent lingered in the toasty air, the fragrance clean and masculine. She resisted sniffing or savoring, afraid he’d find her weird. Computer equipment dominated the space. He’d propped a Tablet on his cloth sofa. The screen showed a crackling hearth. Red stockings dangled from its holly-adorned mantel. His flat screen displayed a festively decorated Christmas tree. Grandma Got Run Over by a Reindeer played on his cellphone.

She laughed.  “I like the way you celebrate the season.”

“You don’t think I overdid it?”

“Are you using Santa Claus or Rudolph as your screensaver?”

“Alvin and the Chipmunks.”

His smile crinkled the corners of his eyes.

She ached to kiss them.

“Go on, sit.” He gestured to his sofa. “I’ll get coffee to warm you up.” He padded into the kitchen.

She craned her neck. His stockinged feet were large, his hands too.

“Black and hot is good, thanks. Do you work from home?” She’d already figured he did or lost his job since he rarely left this place.

“This is my office. I ditched the corporate world to become a contractor. Works out better for me. I make more money and do what I want.”

“Not to take people’s jobs away. That stinks, especially for journalists. Have you read online news recently? I’ve seen better grammar and sentence construction from ten year olds.”

Great-looking and kind. Warmth poured through her. “I agree. Management said my stories weren’t as accurate or as good as the software. Yeah, right. I pointed out its mistakes. They said everyone has a learning curve. Like the program was a person or something.”

“Bastards.” He offered her a steaming mug. “I wouldn’t code that stuff if I was starving. I’m a game developer. Strictly feel-good entertainment. I don’t mean to sound nosy, but can’t your folks help with expenses until you’re back on your feet? You could freeze to death over there.”

She blew on the coffee and thawed her fingers on the mug. “Mom and Dad are in Florida. Orlando. That’s where I’m from originally. Their jobs were outsourced to China five years ago. They both work part-time now. At their ages, it’s all they can get. I’ve been sending them money to help out. They don’t know I got fired. I don’t want them to worry.”

He joined her on the sofa. “How’d you end up here?”

“Answered an ad that promised medical, stock, advancement, you name it. I hoped after a year, I’d move up to their actual reporting division and from there try my luck at a major paper or news agency. I didn’t last five months. I think I was a stopgap measure until they got the program they wanted.”

“Did they at least pay for your move?”

Her cheeks stung. “I did that willingly for the chance to work there and get fired without notice. Dumb, huh?”

“Not at all. You deserved better treatment.”

Laurel wished she’d talked to him before scarfing down her cookie dough. Would’ve saved her a zillion calories she didn’t need with those doing zip to curb her appetite. Her stomach growled loudly. She pretended it hadn’t and sipped her coffee.

Scott put his cup on the cocktail table. “Do you like pizza?”

When she could afford it. “Only for every meal. Other than that, no.”

He wagged his finger. “I was about to go out for dinner when your alarm blared. If you don’t like pizza, we could get something else. My treat.”

Hunger didn’t allow pride. Desire kept her from begging off no matter her foolish hope for anything romantic between them. She wasn’t a babe by any means, especially tonight. In the looks department, Scott beat out Greek gods. Plus, he was a genuinely decent person. The total package wrapped up in a festive holiday bow. Her chest ached from anticipation, uncertainty, and happiness. The unholy trio.
Posted by Nicole Austin at 12:00 AM