Excerpt from Set Me On Fire by Berengaria Brown 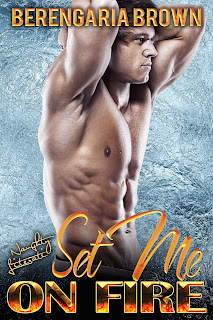 Blurb:
Blair, Alex and Kurt meet in the stairwell of their office building during a fire drill. The building may not be burning, but they are, for each other


Alex watched as Blair stepped out of her stilettos then sank onto the grass beside him. She waved a hand at Alex, saying, “Alex. Kurt. Shoes.”

Dropping down beside her, Alex laughed. He reached over and shook Kurt’s hand. “I’m Alex, not shoes.”

“Oh God, my feet,” groaned Blair, ignoring them both.

“I’m glad you finally made it. I’m bored with playing the few pathetic games on my phone. Remind me to download something better before the next fire drill.”

“Remind me to take a day’s vacation if it ever happens again,” said Blair tartly, massaging her toes. “Hell, that hurts.”

“Please do. I’m not sure what rules apply to fire drills but I think fixing my feet right now ranks right up there with life-saving.”

Her skin was warm and soft under his hands. Gently he massaged the ball of her foot, rubbing circles and pressing into the pads, loosening up any tightness there. He separated each toe, stroking its length, rubbing it between his fingers and again massaging the pad of the toe. She had such sexy feet. Long, straight toes, narrow ankles, high arches.

While he tended to her feet the three of them talked. On the surface what they were saying was light, casual, just people sitting on the grass in the park waiting for the bus back to work. But underneath the conversation ran something much deeper, stronger. Lust and passion were in each look, each pair of eyes. Words used had double meanings, or the gestures that accompanied them gave them an underlying sexual connotation.

“If this weren’t a public park, I could suck your toes, pulling them into my mouth, making them warm and wet. You’d soon feel much better,” he said, his voice barely heard over the noise of the park.

“Damn, that sounds good,” she whispered.

“Yes it does.” Kurt picked up her other foot and began massaging it. “I’ve never really been a foot man but I’m beginning to think the idea has potential.”

Alex’s cock pressed against his zipper trying to get out of his pants. He was so hard his dick could likely pound nails at the thought of Blair and Kurt in bed with him. Oh yeah, his wildest dreams come true. A warm, cozy, soft woman—with a sassy mouth—and the athletic hardness of a man. Blair had been absolutely right about that. Kurt was yumminess personified. Fit, wiry and hard all over. It would be agony deciding which one to fuck first.

Did Kurt swing both ways too? Or was he just being polite? Alex looked into Kurt’s eyes and saw the hot lust there. But was it lust just for Blair or for him as well? Alex wanted both of them. Did Kurt want him as well as Blair?

Blair was staring at Kurt. Are they fuckbuddies? Am I about to make a fool of myself here? And yet the underlying sexual tension feels like it involves all of us.

Blair smiled that huge, sexy grin that lit up her whole face so beautifully. “I’d like that.”

“Count me in,” said Alex, willing his unruly cock to stay inside his pants for a few more hours.

Kurt’s fingers danced over his cell phone and the hot tub was booked.