Excerpt from Fist Me by Berengaria Brown 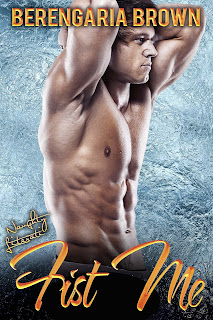 Blurb:
Maeve nearly fell off her barstool when sexy Taryn asked her to fist her. But is it the right thing to do?

Excerpt:
Taryn had never been so aroused in her whole life before. She didn't consider herself to be a cold person, but sex had never been the earth-shaking experience she'd read about in books. In fact, half the time the only way she even came, was after Ben was asleep and she jerked herself off.

Of course she knew some women never came from a cock, but still, she often felt cheated. If he'd just done more to please her, instead of concentrating on getting his own rocks off... Oh well he was gone now and she'd worry about what his parents and friends would say to her about that later. And it would cause a storm of comments and recriminations, she knew that.

Maeve took a jar of scented lube out of the nightstand. When Maeve opened the lid, Taryn breathed in the scent: vanilla, the same as the little tea candles. Taryn watched excitedly, only just aware that the quiet background music was adding to her arousal. Oh yeah. Using all the senses. I must remember that.