Excerpt from My Cups Runneth Over by Francesca Hawley 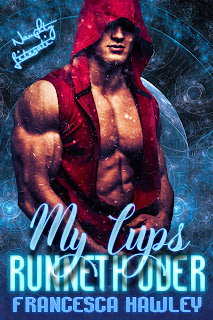 Blurb:
Five years ago, Brook’s tarot reading and dream premonition predicted his lover’s death so he left to protect her. On the morning of his cousin’s wedding, Delia and Brook meet again. Will their reunion bring love or danger?
*Published in a previous Naughty Literati anthology.*

Delia Heath took a deep breath as she walked toward the home of the Linden clan from a large, roped-off parking area. If this joining ceremony was for anyone but Mary Linden, she would have found a way out. But Mary was one of her dearest friends in spite of the fact that she worked for Brook, Delia’s ex.
Guests laughed and chattered as they made their way around the house to the grounds in back where the ceremony would be held. She wanted to mingle with them, but unfortunately she couldn’t because she was part of the joining party. After smoothing her skirt carefully, she steeled herself for the inevitable and braced herself to face him. Brook Linden. The love of her life. The man who’d walked away over a tarot reading and a premonition. She frowned. They could have faced any challenge together, but he’d unilaterally decided she needed protecting so he’d left. Damn macho idiot.
The door opened as she reached up to knock. Speak of the devil and he appears. Why did he still have to be so gorgeous? He stood a couple inches over six feet tall, with well-muscled broad shoulders. He wore navy pants and a sky blue open-necked shirt. She could see a hint of his chest hair which she’d always loved running her fingers through. She forced her gaze back to his face so she wouldn’t stare at his narrow hips and hard abs. There were a few more lines on his tanned face, but his masculine beauty was still there. His full lips curved and his green eyes with impossibly long lashes, framed by straight black brows warmed as he took her in.
Even now, after five years, she still felt her body react to him. Her nipples beaded painfully and her pussy clamped on a thick cock that wasn’t there. She raised one of her brows, waiting for him to say something. Anything.
“Delia? Lord and Lady, is it really you?”
“Brook, who’s there?”
Mary’s call distracted him long enough that he stepped back and Delia slipped into the house, ignoring him. She walked over to Mary and enveloped her in a hug.
“I’m so glad you made it. I was worried I’d have to find another bridesmaid.”
Delia grinned at the tiny, dark haired dynamo. “And suffer your wrath? Never.”
“It’s so good to see you. Did you have a good trip? Couldn’t you have come sooner?”
“I was working on a commission that was due yesterday.”
She smiled, not bothering to say she had no intention of arriving any earlier than she had to. Nor did she intend to stay any longer than she had to either. The less time she spend in close quarters with Brook Linden the happier she’d be. Her feelings for him still stirred beneath the surface and she didn’t want to get brushed off again. It would hurt too much if he didn’t want her.
Posted by Nicole Austin at 12:00 AM