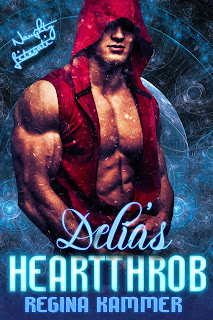 A thwack and a curse presaged Edward’s entry into the lab. He stumbled in from his office, bleary-eyed, his brown curls disheveled, his shirtsleeves rolled to the elbow. Whatever Sebastian had done to him last night or this morning—or both—had been clearly far too strenuous. Delia sighed. Sometimes all Edward needed was a cuddle.
He pawed through the drawers of the tool cabinet. “Seb, have you seen my—”
He glanced over his shoulder and froze, staring at Delia, his cheeks rosy under fine stubble, the color deepening as his gaze swept over her thighs.
He turned to face them. “Sebastian,” he asked, now seemingly mesmerized by Delia’s exposed knickers. “Whatever are you working on?”
Sebastian beamed. “I call it the Broadchurch Phalangical Restraint System.”
Delia rolled her eyes. How typical of Sebastian to name the invention after himself.
Edward scowled as he approached. “Is this for one of those clandestine establishments you frequent?” He ran his fingers over the segments of a metal hand, so tantalizingly close to the bare thigh above Delia’s stocking. He no longer blushed, instead his lips and forehead twisted in a thoughtful expression.
“Yeah,” Sebastian said. “Dominick’s.”
Edward’s pinky strayed to her inner thigh. A frisson of lust tore through her, melting her insides, like the ganache centers of the bonbons she had indulged in the night before.
Edward paled and snatched his hand away.
“Miss Bennett,” he said as if just noticing her. “Good morning.”
Delia’s heart pounded, no doubt sending blood to color her cheeks the same red as her frilly knickers. “Good morning, Professor Ockham.”
Posted by Nicole Austin at 12:00 AM