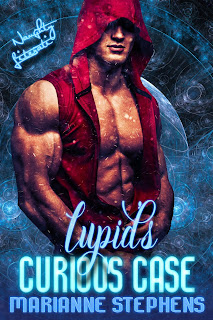 Blurb:
Alan’s last job as Cupid 84 involves neighbor Amy and a special box of candy. Both secretly desire the other. Can they find true love?
*Published in a previous Naughty Literati anthology.*

Amy picked a pink candy with a red heart on it. Alan chose a blue piece that had white sprinkles on it. They popped their chosen pieces into their mouths at the same time.
A tingle went through Amy as she savored the rich treat. It spread through her body, and sent a shocking flame of desire to every inch of her body. There was a catch in her breath, and she itched to satisfy a lustful need she’d never felt with Scott.
She peeked at Alan, and noticed his eyes were closed as he devoured his candy. His breathing quickened, and dropping her gaze lower, she spied a distinct bulge pressing against his jeans’ zipper.
Alan opened his eyes and stared into hers. A heightened sense of craving, want, desire seemed to spark between them. Amy was at a loss for words, at least common sense ones. She wanted him. Here. Now. With a wanton passion.
“Try another piece,” she whispered, almost afraid to say anything.
“I—Sure. These are overwhelming. All my senses are aware of the decadent taste it leaves in my mouth. You too?”
“Yes,” she managed to answer before biting into a green piece of candy with a soft, minty inside that slid down her throat, leaving more tingling sensations wreaking havoc with her body.
Alan raked a hand through his hair. “Is it me, or is it hot in here?”
A stinging rush of heat course through her, settling in her cheeks. “It must be the champagne.” She fanned her face with her hand. “It does feel warmer than before.”
“Why don’t we open your window a little? Cool us off.”
Both stood, and walked to the window. Amy cranked it open and a rush of cooler air flowed inside. For a moment she shivered, and then felt warmer as Alan, wrapped his arms around her.
“You’re cold. Maybe this wasn’t a great idea.”
Amy clasped his arms, hugging them tighter. “No. I mean, we can close the window, but I’m enjoying standing here with you.”
Alan pulled her back towards him. Amy couldn’t stop her hormones from racing into overdrive at the sensation of rubbing against the bulge in his jeans. “Turn around, Amy. I want to see you while I hold you in my arms. Please.”
She quickly turned to face him, never losing contact. Heat radiated between them, satisfying her passionate lust now controlling her every thought. “I want to be held by you—touch you.” She rested her head on his chest. “We’ve missed out on being with each other all this time. I feel a need now. And no, it’s not the champagne talking. It’s me. I’ve always hoped for more between us.”
Alan lifted her head, lowered his mouth to hers, and began with a slow, gentle kiss. He pulled his head away and said, “We’re together now. I want this. I want you. No, like the note said, I desire you.”
His next kiss was more urgent as he rubbed his hands down her back and lifted her rear end closer. “Tell me now if you want me to stop and I’ll leave. I’ll go, but I don’t want to.”
“No. Please stay. I want you,” she moaned, consumed in a need to have Alan make love to her.
The next series of kisses were more frantic, with tongues slipping between teeth to thrust into each other’s mouth. Amy ran her hands down his chest and pressed against the zipper of his jeans. She noted the catch in his breathing as she undid his belt and lowered his zipper.
Then, she slipped her hand inside and touch the torrid flesh of his penis. Alan had circled her breasts with his hands. With every brush across each nipple, Amy’s breathing raced. Her nipples ached to have him hold, squeeze, lave them.
She stepped back, holding her lust in check, for a moment of sanity. “We’ll be more comfortable in my bedroom. I’ll undress you and then you can undress me.”
His smile only encouraged her to take control. “A definite invitation I won’t refuse.”
She took his hand and started walking to her bedroom.
Alan pulled her on a slight detour to grab the candy box, champagne bottle, and glasses. “I have plans for this.” He winked.
Posted by Nicole Austin at 12:00 AM