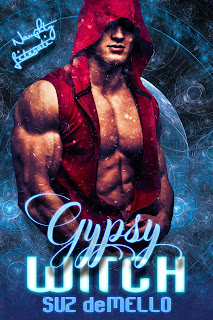 Blurb:
Ben’s a tough, down-to-earth cop who doesn’t believe in magic, yet he falls for a modern-day witch. Will Ben and Elena’s fragile love be lost when she reveals what she truly is?
*Published in a previous Naughty Literati anthology.*

Ben propped himself up on his elbows to better see the naked woman beneath him. Sheened with sweat, Elena’s lush curves glowed in the reddish half-light of her bedroom, curtained in exotically patterned swaths of gauze and silk. A curl of smoke from a lit incense stick scented the air with sandalwood. Otherworldly New Age music flowed out of a boom box in the corner, irritating the hell out of him.
Elena’s bedroom was that of a gypsy witch, and despite the incredible sex he’d been having with her for a month, he wouldn’t allow himself to fall under her spell. Except for in the sack, she wasn’t his type.
They’d met through their kids, eleven-year-olds who’d attended the same summer camp. Now that camp was over, Ben was frankly grateful that Tom and Gina liked to hang out together, since they seemed to keep each other amused and out of trouble. As a single dad, finding activities for his son was tough. Ben hated to admit it, but he sometimes found that Tom was a distraction from his job.
Ben shoved everything extraneous out of his mind to focus on the beautiful woman he was inside. They were the same age—thirty-six—but Elena was nothing short of spectacular. She always wore an enormous topaz on a golden chain that dangled between her breasts. She claimed she focused her power through the jewel. Ben thought that was wacko, but didn’t care.
Too bad she was, literally, a card-carrying nut. He remembered the time she’d shown him her membership in the Northern California Church of Wicca. He’d concealed his smirk only because he wanted to lay her. And that had to be all, he admonished himself. He was a sheriff’s deputy, and couldn’t afford to have a permanent relationship with Elena Lautari. She wasn’t the kind of woman who fitted in with the rest of his life.
He tried to picture her drinking a beer with the other cops and their wives, and failed utterly.
“What?” she asked, running light fingertips up and down his sides, eliciting shivers.
“Whaddaya mean, what?”
“You looked as though you were ten miles away.” Her caress slowed. “I wonder what the kids are doing?”
“I think they went over to my place. They’re probably watching a DVD. It’s too hot to go outside and swim.”
“Who’s watching them?” Her voice sharpened.
“Aw, Elena, relax. They’re okay. They know what they can and can’t do.”
“Mmmm. Hope you’re right.” She reached for him, this time climbing on top. He wasn’t sure he was ready for another bout yet, but she knew exactly how to turn him on.
*****
Hot and dusty, Tom stood with Gina at the corner of 12th and J Streets in downtown Sacramento. Above him, the door of the Masonic Temple was set within a Gothic style arch made of peach-colored stone. The arch was high and pointed; on each side of the arch, a knight stood brooding, eyes downcast, hands folded over stony hauberks.
He ruffled his short blond hair, trying to cool his sweaty scalp, and glanced over at Gina, who clutched a sheaf of notes in one sticky hand. A basket lay on its side at her feet.
“Can’t we do this on an afternoon that isn’t a hundred-million degrees out?” Tom looked over at the thermometer/clock high on the side of the bank across J Street. It flashed 100 in dots at one second time intervals. As he watched, the number changed to 101, and the time to 3:19.
“We’re actually supposed to do this at midnight.” Gina pushed dark bangs off her damp forehead. “But we aren’t allowed out after dark. Besides, it’s dangerous downtown at night.”
“I know that. Why are we trying to do this if we can’t do this right?”
“You got a better idea?”
“Yeah. Let’s go to Vic’s and get ice cream.”
“We spent all our money on this stuff.” She nudged the basket with her toe. “We might as well go ahead with it. It won’t take very long, and then we can go over to your house and swim.”
He sighed. “Anything to drink in here?” He squatted down and emptied the contents of the basket onto the sidewalk.
“Careful, there’s glass in there. Hey, don’t drink that!” She grabbed a bottle out of his hand. “That’s yucky.”
“What is it?”
“Frog’s water.”
“Like frog pee? Eeewww.”
“Here.” She handed him a bottle of Snapple lemonade.
He drank before passing it back to her. After she’d taken a few gulps, she flipped through the notes and sorted the ingredients for the spell. “Lucky my mom and your dad are really into each other,” she said. “I could never have gotten into her spell book if she was paying attention.”
Posted by Nicole Austin at 12:00 AM