Excerpt from The Ghosts At Substation #69 by Berengaria Brown 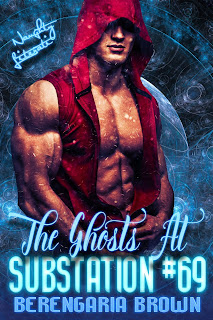 Blurb:
A woman fleeing her abusive partner. Her high school sweetheart who wants to rescue her. And two ghosts.
*Published in a previous Naughty Literati anthology.*

“You shouldn’t be here, Doug. If Lowell sees you he’ll kill you. I’m not exaggerating. He has an entire closet full of guns.” Fern shivered. Lowell had shown her those guns any number of times, usually when she’d annoyed him and he wanted her to do better next time.
“He’s more likely to kill you. I’ve seen the bruises on your face. And during summer you didn’t once wear shorts. You used to wear shorts all the time. I’ve always loved watching you in those shorts. I bet your legs were bruised and that’s why you kept your jeans on.”
Fern shook her head. “I’m stupid. I make a lot of mistakes. Go away before Lowell gets back. Please. I don’t want him to hurt you.”
“See. That proves he’s bashing you. Real men don’t hit their women even if they do make mistakes. Anyway, I watched him go in the bar on Main Street. He’ll be there drinking with his buddies until midnight. This is your chance to get away, Fern. You have to leave him now before he breaks your bones and really hurts you bad. Come on. Come with me now.”
Fern wanted to. She wanted to so much she sank to the floor and shook even harder. But it wasn’t possible.
“He’s taken my ID, my driver’s license, my Social Security card, my passport. If I run away I’ll have no way of proving who I am and getting a job. I can’t leave him.”
“Of course you can leave him. You aren’t married to him, and even if you were, it’s illegal for him to take your ID from you. We’ll get it back or get you new ID. Whatever works. Just come with me, now, please. While Lowell is gone. This is our chance to be together again. I’ve never stopped loving you, never. I want to look after you. I want to wash all the bad times away and make your life full of happiness again.”
Fern sat on the floor shaking her head, tears trickling from her eyes. She’d been so stupid, so very, very stupid, to go with Lowell, to believe him. She’d been infatuated with the older man. Blinded by his nice new car, his beautiful home, his managerial position at the local bank. At first he’d showered her with pretty things, taken her to the best restaurants, been happy with her. But before long she’d started making mistakes, making him angry with her incompetence. But the more he got angry, the stupider she became, until all she did was get everything wrong. Doug would hate her too.
“It’s no use, Doug. I’m so stupid. I do everything wrong. I’m always making mistakes. You’d hate me in a few weeks, too.”
“No I won’t. I’ve loved you since the eighth grade. I’ll never stop loving you. And you aren’t stupid. You graduated school in the top ten in our class. Please come with me. Please let me look after you. I’ll protect you. I know where you can hide from Lowell until we get your paperwork sorted out. I’ll bring you food and everything you need until I can look after you in public. I want everyone to know I still love you and that you’re mine now.”
“You want me?”
“Of course I want you, Fern. I’ve always wanted you.”
“Even though—”
“Don’t keep saying you’re stupid. You’re not stupid. Once you’re away from Lowell you’ll get your confidence back and everything will be all right.”
Fern wanted everything to be all right again. She knew she’d never be happy with Lowell. That she’d never live up to his standards and demands of her. She’d known that months ago. If she was hidden so he couldn’t find her, if the police made him give back her ID, maybe it would be okay. She wanted so much to be with Doug again. He’d never made her unhappy the way she was now. Even when they’d argued he’d always forgiven her and he’d never once hit her or threatened her. She wasn’t stupid around Doug and even when things went wrong he was much more likely to laugh and joke about it than complain.
“I don’t know. I want to, but…” She slumped against the wall. “I already told you he took the door key with him. I can’t get out. The door is deadlocked.”
“What about this window we’re talking through? Can’t you open it and climb out? Or even break it.”
“He’ll be so angry if I’m not here when he gets back. That’s why he locks me inside. So I’ll be here for him.”
“I’m pretty sure that’s illegal, too. What if there was a fire? You’d have to get out then. Do any of the windows open?”
“Only the one in the bathroom.”
“Can you climb out of it? Or just break this one.”
“Let me look.” The bathroom window was high, but Fern had always been good at gym class. She stood on the side of the tub and pushed the window open as wide as it would go, then she gripped the windowsill and chinned herself up. There wasn’t enough room to turn around and exit feet first, so she slid through head first, but Doug caught her and lowered her to the ground.
“Let’s go. My car is just around the corner.”
“Where is this hiding place?”
“You’ll love it. It’s the disused electricity substation. Substation #69.
Fern hardly dared hope everything would be okay again, but she went with Doug, loving his warm arm tightly around her, his strong body beside hers. Already she felt safer than she had in months.
Posted by Nicole Austin at 12:00 AM