The Naughty Literati have been busy revamping and Naughty Novellas was first on our list. Our biggest boxed-set to date has both a new title and new look to better represent the sexy novellas contained on the inside, and we are loving it! 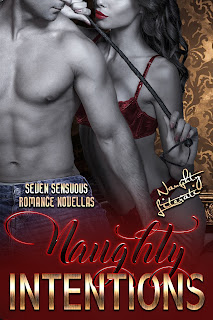 Find out what reviewers are saying

Enchanted Lovers: The Woodsman ~ Belle Scarlett Once upon a time in the Enchanted Forest where cursed beings are consigned until the spells that bind them are broken… What if the Big Bad Wolf was the good guy? *This title, previously published as The Woodsman, has been revised and reedited.*

Kahn's Haven ~ Nicole Austin Anita Bennett’s fight to solve the mystery of eight lost days leads to a hunt for the jaguar-man who haunts her fractured memories. Her plan is simple—find and seduce him. What she didn’t anticipate is his resistance. *This title, previously published as Rakahnja’s Haven, has been revised and reedited.*

Anything You Want ~ Tina Donahue At a hedonistic resort, her indecent cravings will be sated… With the big three-o days away, Jamie’s had it with dieting, exercises, and being alone. Off she goes to Wicked Desires, a decadent Caribbean resort where carnal appetites rule and billionaires Creed and Tav crave a woman exactly like her. *This previously published title has been revised and reedited.*

Tropic of Pleasure ~ Tina Donahue The one woman they shouldn’t want. Two Doms she can’t resist. Bondage, submission, punishment beyond her wildest desires. Cara’s wanted Hud and Ryder forever. Her dream finally comes true during a smoking-hot weekend on a private island. *This previously published title has been revised and reedited.*

The Property of Twin Dragons ~ Berengaria Brown Twin dragons Drake and Dragun are convinced Lois is their mate. But is she stealing from the company? And why won’t she talk to them?

Walpurgis Night ~ Katherine Kingston The Viking who captures Fianna demands she heal his brother of a grievous wound. He didn’t ask for her heart as well, but he steals it anyway. *This previously published title has been revised and reedited.*

Posted by Nicole Austin at 9:24 PM