Excerpt from Detour by Lynn LaFleur 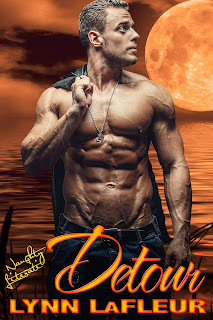 Blurb:
Vampire Tain Remington helps Marina Black when she gets lost, and discovers she has the special gene that declares her to be his mate. *This previously published story has been revised and re-edited.*

Excerpt:
Marina saw the camera shift, so knew someone watched her. She tried to keep her expression neutral. She didn’t want to show her fear to anyone. Alone, lost in a snowstorm, no telephone. She could almost hear the eerie music, the song that played right before the killer jumped out of the bushes with an ax. Or a chainsaw.

Marina leaned out her window. Despite not knowing who that voice belonged to, she had no choice but to ask for help. “Yes, please. I took a wrong turn. There’s no signal on my cell. Do you have a phone I can use?”

“Of course. Please follow the drive to the house.”

The gate with the large “R” in the middle swung open. Tall pine trees lined the drive on both sides. Marina inched forward in the deepening snow. She assumed a house would appear eventually, although she saw no indication that anything existed beyond the gate.

Marina had always believed the majority of people were good, that they would help someone if they could. She hoped her belief held and she didn’t head toward a house of flesh-eating weirdoes.

The drive arced to the right. Marina took the curve, and gasped. A huge house came into her sight. Three stories and made of stone, the Victorian mansion looked like something from a Gothic novel. She couldn’t tell for sure through the falling snow and deepening dusk, but it appeared the house had been built into the rock hillside.

Ancient architecture had always fascinated her. She’d promised herself someday she’d go to Europe so she could drool over all the centuries-old buildings.

Marina stopped her car at the bottom of the steps leading to the double front doors. She turned off the motor and took a deep breath.

Time to meet the flesh-eating weirdoes.

The door opened as she reached to press the doorbell. A man stood in the doorway.

An inch or two over six feet tall and dressed all in black. His dark hair swept back from a handsome face. Piercing blue eyes peered at her from beneath black eyebrows. A hint of stubble covered his cheeks and jaw. His shirt stretched over broad shoulders, tight pants cupped his penis.

He opened the door wider. “Come in, please.”

Marina jerked her attention to his face when he spoke to her. Heat rushed to her cheeks when she realized she’d stared at his fly as if she’d never seen what lay hidden behind the zipper.

Well, it had been awhile…

She stepped into the foyer and he closed the door behind her. “I’m Tain Remington. How can I help you, Ms…”

“Black. Marina Black. I’d appreciate it if I could use your phone.”

He turned left and led her into a large room. An L-shaped mahogany desk dominated one corner. A leather sectional, tables, and lamps made a comfortable seating area in another corner. A rock fireplace covered one wall, an entertainment center the other. Marina didn’t know whether to call it an office or den.

“My assistant’s hideout,” Tain said, his eyes crinkling at the corners. “He spends a lot of time in here, so I want him to be comfortable.” He gestured toward the desk. “Help yourself to the phone. Would you like coffee or perhaps hot tea?”

He closed the door behind him. Marina’s knees grew weak. She flopped down in the chair behind the desk before they gave out on her. It’d been months since she and her boyfriend broke up, but that didn’t explain the breathless feeling, the heavy thudding of her heart. Tain Remington was a handsome man. That shouldn’t matter. Handsome men flitted in and out of her boss’s office every day. None of them made her clit throb, her nipples peak.

She didn’t think any man had ever affected her so strongly, so quickly.
Posted by Nicole Austin at 12:00 AM