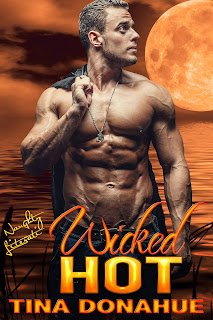 Blurb:
When bad boy rockers Scott and Noah unexpectedly land in Hell, they don’t expect to meet Patience, their lovely admissions coordinator. What happens next is sinfully wicked and pure heaven. *This previously published story has been revised and re-edited.*

Patience Cadwell gobbled devil’s food cake, comfort food for the damned. Contrary to popular belief, there was chocolate in Hell. Satan was an SOB, but no fool. He didn’t want an uprising from his female staff.

As the admissions coordinator, Patience logged information on the poor souls who ended up here, thanks to earthly vice or a deal with the Devil. Those who’d unwittingly sold their souls were the saddest. They always arrived looking bewildered.

Precisely as she had centuries before when she’d jumped from the proverbial pan into the fire.

Finished for the day, she sagged into her chair, too tired to leave even though she should. She had exactly one hour off before her next twenty-three hour shift began.

She crammed cake into her mouth, looked up, and froze.

Their baffled expressions were still sexy, both of them tall, over six feet, their bods lean and muscular. If she had to guess, she’d say they were in their early thirties. One was blond, the other dark-haired, their features downright gorgeous but roughly masculine.

They exchanged a glance and turned to her.

After swallowing hard, she brushed crumbs from her mouth and prim white blouse.
“Hey.”

Mr. Beautiful Blond lifted his dark eyebrows, a nice contrast to his light, shoulder-length locks. “Ah, hey.” He chuckled. “I’m not sure why we’re here.”

“Or how we got to this room.” Mr. Darkly Handsome scratched his bristly cheek. “I don’t recall taking the elevator up to this floor.”

Her computer dinged. The screen showed their bios. She lifted a finger and read. The light-haired one was Scott Myers, the dark one Noah Reese, both rock artists.

The hefty bulges behind their flies were downright luscious, what every female desired, and what Patience had never gotten here or on Earth. She slumped. “There’s something I have to explain to you.”

Scott fingered his feather earring, its golden color matching his hazel eyes. “Explain? Did we do something wrong during our show?”

She bet they’d been awesome. According to their profiles, their band Raw Daze played classic rock, both guys performing vocals. Sometimes the music had a hard edge. In other instances it was lushly sentimental like Bryan Adams’ Have You Ever Really Loved a Woman. One of her fave songs. “Not that I know of. The problem happened when you were cheating.”

Scott blinked. “What are you talking about? I’m not even dating anyone, much less involved in a committed relationship.” He zeroed in on her mouth. “At all. I’m totally free.”

“Me too.” Noah wiggled his eyebrows.

Wow, they were flirting. She smiled like a lovesick teen then sobered given the grave situation.

Scott ambled closer. “Even if we were messing around, why would management care…or did you want to know?” He wagged his finger.

Patience would have willingly sold her already mortgaged soul to lick it and any other part of him.

Noah crossed his arms. The tribal tat on his left biceps showed savage curls and swirls.

Her mouth went dry. “I’m not talking about women. You were gambling.”

Scott shrugged. “We are over twenty-one, and this is Vegas.”

“Not exactly. In fact, not anywhere close. We’re far, far away from there.”

She braced herself for the fallout. “I’m sorry, but this is Hell. Literally.”

They stared then laughed.

She flicked her hand. The plush surroundings disappeared, showing the real décor…a barren landscape in orange and red. In the distance, craggy mountains spewed lava or belched smoke, a sulfur stench fouling the air.

The guys wrinkled their noses and shrank back.

“What the fuck?” Scott flung out his arms. “What the hell is this?”

His armpit hair was dark and silky. His musky, clean scent enticed her as nothing else had. “Exactly. That’s what this is—Hell. What you saw before is an illusion.”

To demonstrate, she brought the waiting room back.

Noah bolted to the door.

It slammed. He shoved against it, grunting loudly. The thing wouldn’t budge. He beat and kicked the wood.

Scott rubbed his forehead. “Someone must have spiked our drinks. This has to be a hallucination.”

“Sorry, no.” She left her chair and offered him a Corona, his favorite beer.

He inched away. “You want to drug me even more?”

“I swear nothing is in the brew except what the manufacturer uses. Before you say no to this, you might need a drink to calm down while I explain.”

“I don’t want to hear anything else.”

“Sorry, but it’s my job.” She slapped the bottle in his hand. “Noah?” She gave him a Coors.

He swung his bottle against the door. It still didn’t open, nor did the glass break.

“Please.” She smoothed her long black skirt. “Try to relax.”

They downed the booze and tossed the bottles, their eyes still wild. Breaking protocol, she gave each another drink. “Sit.” She gestured to a sofa. “Please.”

They drank and paced.

She followed, wringing her hands. “I know this is hard to understand, but you were counting cards.”

“Huh?” Noah whirled on her. “Since when? I was losing at blackjack. So was Scott.”

“That may be, but Satan doesn’t care.”

Scott pointed at Noah. “I told you we shouldn’t have played this gig. I knew it would be trouble. Our brains are probably fried from the drugs someone put in our—”

She shouted, “No one drugged either of you. Satan owns the casino where you performed. The property isn’t in his real name, but an assumed earthly one. I’m sure both of you have seen him in news reports in his human form. He doesn’t like card counters, even if they’re technically legal in Vegas. He hates losing one cent. You pissed him off by even trying to beat the house. And now you’re here.”

He smelled so freaking good, she sniffed. He leaned in, all macho man. She liked that.

“Hold it right there. My name is Patience, not babe.”

“Excuse me. Patience. Even if you’re hot, that doesn’t mean—”

“You think I’m hot?” She waved her hands, stopping him before he could speak. “In appearance, that is. Not hot temperature wise.”

Both guys sweated badly. She figured from the heat here and possibly their anxiety. Perspiration coated her throat, more from her reaction to them than anything else.
Scott wiped his brow. “Of course the way you look.” His gaze prowled her curvy figure. Noah’s did, too. Raw male interest flashed in their eyes.