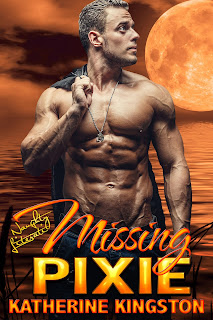 Blurb:
It started with an escaped pixie and then Lauren’s involvement with sexy Ryan Davidson and his daughter took a turn into the really bizarre.

“Ma’am? I’ve lost Violetta. I think she flew into your yard. Have you seen her?”

Lauren set down her book and turned toward the gate into her back patio. The little girl standing outside it, peering through the wrought iron scrolls, was maybe ten or eleven. Lauren had seen her a couple of doors down on occasion but had never talked to either her or the father. There didn’t seem to be a mother present. She went to unhook the latch and let the child into the tiny yard behind her apartment. “Is Violetta your doll?”

“Oh. I don’t think I’ve seen her, but maybe you should describe her.”

“She’s about this tall.” The girl held her hands about six inches apart. “She has purple hair and greenish blue wings. Dad brought her here to keep me company, but then school started again and Violetta got mad ’cause I wasn’t around as much. She started hiding from me.” The girl wandered to the far end of the terrace where Lauren had planted a series of pots with colorful foliage and flowering plants. “I don’t see her back here.”

Lauren recalled what a grand thing a child’s imagination could be and refused to discourage her. “Maybe she just wanted some quiet time alone, so she’s hiding and she’ll come back later.”

“Maybe. She usually does after a while.”

The forlorn wistfulness of the child’s tone tugged at Lauren’s heart strings. “What’s your name?”

“I’m Cindy. Daddy and I are in the apartment on the other side of that one.”

“I know. I’ve seen you come and go occasionally.”

“I stay with my daddy now. He’s really a pretty good dad, I think, but sometimes I get bored. Especially on the weekends when I’m home.” She stared at the glass of lemonade on the patio table.

Lauren decided to take the hint. “Do you think your dad would mind if you had a glass of lemonade with me? And maybe a cookie?”

“Nah, I’m sure he wouldn’t. He tells me not to take stuff from strangers, but you’re a neighbor, not a stranger, right?”

“Well, I am still a stranger to you. But you know where I live. Have a seat and I’ll be right back.” Lauren brought out another glass of lemonade and a tray of cookies.

“This is kind of like having a tea party, isn’t it?” Cindy asked.

“It is a bit. Do you go to school around here?”

Cindy named a local school, said that she was in fourth grade there, and talked about her teacher, her favorite subjects, her friends, and the boy she had a crush on. She was in the middle of relating the virtues of Jimmy Scott when another voice drew their attention back to the gate.

“Cindy, what are you doing here?”

The deep, rough-edged tone sent a little shiver down Lauren’s spine. The owner matched the voice: tall, dark, and not quite handsome, but sexy as hell.

“We’re just having a talk, Daddy. Violetta came this way and I was chasing her, but she disappeared again. So Miss Lauren and I had some lemonade and talked.”

The man came through the gate, closing it behind him and approached the table. “That was nice of Miss Lauren to treat you. But it’s time to come home.”

Up close she could see that his eyes were light, a very pale blue, striking against his olive skin and dark hair. His reserved expression bordered on harsh. The power and masculinity he exuded sent shivers down her spine.
Posted by Nicole Austin at 12:00 AM