Excerpt from Fire and Ice by Francesca Hawley 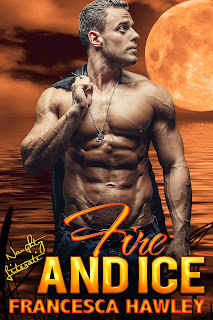 Blurb:
What does a sassy shifter sub do when she wants a new Dom? Puts herself up for auction. Fiery Beck Blackwolf can’t believe it when Mr. Icehole, Scott Whitewolf, melts enough to outbid everyone. Can fire and ice mix or will fear and family dysfunction burn out of control?
Genre/theme:
Shapeshifter, paranormal, rubenesque

Vivid. He nearly choked on his soda water as she walked in the door. Everything about her was vivid. He couldn’t decide if she was dressed for the Halloween party, or if her retro style was just her. Her curled black hair was 1950s glam. Everything else she wore fit the style, from her jeweled, pink-framed cat-eye glasses, to her puffy pink fifties-style party dress, to her coordinating stilettos. Her nails and lips matched the pink of her dress and shoes. She paused as if on a runway, waiting for everyone to see her.

Scott Whitewolf blinked as every head turned at her screech. She did a funny little dance then launched herself across the room. He had no idea how the hell she ran on those stilts, but she did it.

“Big Daddy Grizzly! I’ve missed you!” she cried as she threw herself onto Jed’s lap and into his arms.

She planted pink kisses all over his bearded face. He caught her close in a hug, flipped her onto her belly and smacked her bottom five times, damn hard. She giggled and wiggled. Jed flipped her back over and she kissed his lips then his nose.

He laughed. “How could I not, you bad girl?”

“Too true, little girl.” She pulled her lipstick and mirror out of her clutch to quickly and efficiently fix her lips. “So how did your last job go?” he asked.

“Fab. A plus model in Italian Vogue, can you believe it?”

“Thanks.” She smiled, yet took the praise as her due.

Scott set down his soda water, and her twinkling dark eyes turned to him. He felt like he’d been punched in the gut. If someone had set out to create his fantasy female, she would be it. Granted, the candy pink was a bit over the top. He’d prefer her in a more conservative pastel, but those lips. Those eyes. Jeez, she had the most elaborate cat eye make-up under those glasses of hers. Her body was rounded in exactly the right places. Her full breasts rose from a lacy deep v-neckline with a pink corset below her bust that cinched her waist. Below the bustier was a lacy pink confection of a skirt.

“Who’s your friend?” she asked.

She tilted her head and raised her pink-lace-clad hands up to her glasses, lowering them just enough to see over the top.

He lifted the water, tipped it toward her in a toast and took a drink. Her name sounded familiar but he wasn’t sure why. This was definitely a female who left an impression. She blinked once. Then her lips slowly started to curl. She winked and pushed her glasses back up. His cock rose to attention like it was tied to a string.

She turned to Jed and tilted her head toward Scott. “Is he the one?”

“He is!” She bounced and he almost winced in sympathy. If Jed was as hard as he was, a bouncing bottom could hurt and hamper an otherwise pleasant evening.

His brows raised and he let out a single bark of laughter. He knew they called him that but no one had ever said it to his face before. She twisted on Jed’s lap to face him and placed her elbows on the table. She set her chin on her hands giving him a glimpse of heaven in the mounds she put on display. That was some vision of cleavage. What male wouldn’t want to bury his face between her breasts to kiss and lick every inch?

“Why what?” He raised his brows at her question.

“Why do they call you that?”

“You already said why – cool as a cucumber.”

He fought to keep his lips immobile. Fought. Usually this wasn’t an effort at all. He rarely if ever smiled. But she had him amused twice in as many minutes. She certainly had his attention.
Posted by Nicole Austin at 12:00 AM