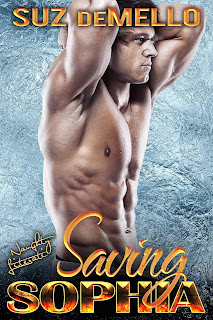 Blurb:
“It doesn’t matter” is cynical Sophie Fortune’s motto. Then her best friend is killed and Sophie herself is targeted. Can her bodyguard show her the way to love, self-respect and safety?

... After word had got out that supermodel Sophia Fortune was working at Out of the Closet, the charity shop was inundated with customers, which was fine with her. She wanted to honor Tink by donating her time, and better yet, she was kept too busy to mourn more than was healthy. She had cried a river at the funeral and the inquest, which had concluded that her dear friend Belle Tinker had been murdered by “a person or persons unknown” when she’d closed up the shop late one winter evening.

Sophie adored the shop, a quiet retreat from the bustle of Marylebone High Street outside. Carpeted in cream pile, lined by racks of designer clothing and smelling of Chanel No. 5, the long room calmed her the moment she entered, regardless of the number of customers. The chime of the bell above the door and soft Diana Krall piano were equally soothing. No wonder Tink had loved this place.

Tink had mattered. Out of the Closet mattered.

That Sophie’s service, if it lasted a year, would fulfill the conditions of her parents’ odd will was a side-benefit that did not matter. She had more than enough money, given that she’d been modeling since she was thirteen.

Even the warnings of the detective investigating Tink’s murder didn’t pierce her serenity. A tall, well-built fellow in a sombre suit, he’d gathered everyone who worked at the shop together to warn them. We believe that Ms. Tinker was attacked because of her association with this shop... When you leave at night, be sure you’re not alone...

Though he had a pleasant North Country accent like Jon Snow in Game of Thrones, she’d barely heard what he’d said—she’d been too occupied imagining him naked. He looks far too young to be a Detective Inspector. Hazel eyes, dark hair...yum. And what a body!

That freaks targeted LGBTQ folks bothered Sophie, but she didn’t think she was in danger.  Not only was she straight, but she’d been dealing with paparazzi all her life—she knew how to get rid of unwanted attention. And because no additional attacks had occurred, she figured Tink’s murder was a one-off.

So one Friday evening, when the assistant manager wanted to leave early to attend her daughter’s violin recital, Sophie said, “Sure, go ahead,” without a thought to her personal safety.

At six p.m., she locked the front entrance, then set the alarm before leaving via the side door, which opened into an alley alongside. Night fell early in January, leaving the little side-street dark, cold and deserted. She pulled the door closed behind her, double-bolting it. With the shop’s interior lights off, the alley was completely cast in shadow except for one light above Out of the Closet’s door.

But it didn’t matter. The High Street, with open shops and taxis galore, was just a few steps away. After fumbling in her satchel to find her e-cig, she hitched the bag onto her shoulder and sucked in a pleasurable drag, then turned toward light and people.

A blaze of pain shot through her head and she dropped to her knees. “Ow! Shite!” She reached up, and something whacked her hand, then hit the back of her skull again. She screamed before falling forward, forehead to the pavement.

She awakened in a hospital bed, with three concerned faces peering down at her. One she recognized—her brother Peter. “They must have rung you,” she said faintly. The woman was a mystery; a doctor, perhaps, judging by her atrocious garb. And the third was...Detective Inspector Dreamboat.