Both are set on San Juan Island in Washington state, very close to the Canadian border. It’s a place near and dear to my heart. It’s pretty remote, accessible only by boat or plane. In the summer, the island is crawling with tourists. In the winter, only the locals remain.

The setting is a pretty important part of both stories. One reviewer of Undamaged called the island “the third character”. For both stories it was the setting of San Juan Island that inspired the plot and the characters. A visit to the San Juan Islands several years ago changed my life. I wanted to honor that almost mystical location and its very interesting history.

In Undamaged, my firefighter hero, Royce Donovan, is sent to the island for rehab after a tragedy drives him to drink. My heroine, Samantha Vickers, a National Park Service historian, found her way there because of a traumatic event in her past.

I purposefully chose Samantha’s profession as NPS ranger. San Juan Island has a unique National Historical Park. The Park is divided in two: English Camp at the northern end, and American Camp fourteen miles away at the southern end. The island was occupied in the mid-19th century by both the British and the Americans as they worked out the precise border between Canada and the United States. This event is called The Pig War and lasted from 1859 to 1874.

In Undamaged, the distinct landscapes of the two camps is highlighted. Samantha and Royce meet amidst the lush greenery of English Camp, and sparks fly when they hike along an ill-traveled trail. Later, at American Camp, they have an intimate connection against craggy coastal rocks with dramatic vistas of unending sky and crashing waves.

Undamaged is out now and only available on Amazon as part of their Kindle Worlds program.

Naughty Flames: Eleven Fiery Romances, which includes "Disputed Boundaries", is available at the special pre-order price of 99¢ during November only! Release day is December 1st! 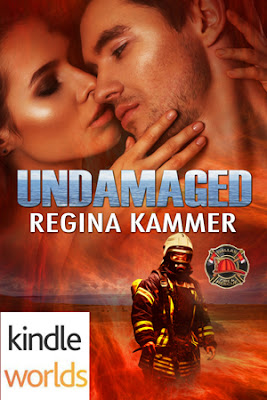 Undamaged by Regina Kammer
Working wildlands fires is what Royce Donovan was born to do. But he’s been living in Dallas for the last year and fighting urban fires is fraying his nerves. When tragedy strikes, Royce finds solace in alcohol, and ends up in rehab on rural and remote San Juan Island. 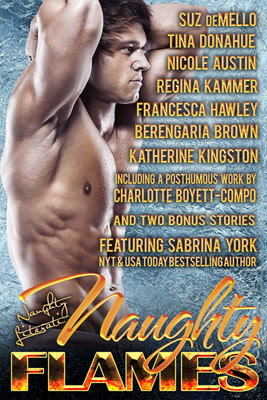 "Disputed Boundaries" by Regina Kammer
appearing in Naughty Flames: Eleven Fiery Romances
Garrison life along the disputed Canadian-U.S. border is so uneventful Royal Marine Braxton Thorne mostly just fools around with his fiancée Tilda. But when American adventurer Gideon Roberts provokes unexpected desires, Braxton finds himself in a war over the boundaries of his heart.

"Disputed Boundaries" takes place on San Juan Island in 1869, during the Pig War -- the final conflict between the United States and Great Britain. The story is the third in Regina Kammer’s Stories from The San Juan Islands collection.