Excerpt from The Loch Ness Monster, Romeo, and Julio by Berengaria Brown 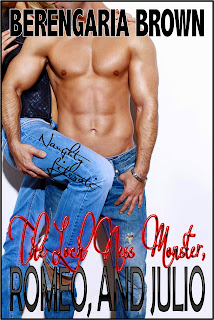 Cam staggered out of bed and into the shower when his alarm went off. He spent the first five minutes wondering whether or not he was crazy to be up so early in the hopes of seeing Nessie, but then he remembered he only had two opportunities to do this, today and tomorrow.

“Come on, man up, princess. How likely is it that Zeke’s will ever send you to Europe again? It’s now or never.”

He dressed and raced out to the parking lot, wondering if Fraser really would be there. He’d truly enjoyed Fraser’s companionship. There were so many other people Zeke’s could have sent with him who wouldn’t have been nearly as easy-going and pleasant travel companions as Fraser. The problem was that he’d like to kiss and hug Fraser, to hold him close and maybe go to bed with him. Which would be a disaster because of his family’s response to him associating with a Campbell.

Cameron sighed. He’d never forgotten the look on his grandmother’s face all those years ago when his older sister had innocently announced the name of the little girl who’d invited her to a birthday party.

“Fiona Campbell? SarahBeth MacDonald, you’ll not be attending any such thing. Only over my dead body will a MacDonald ever be in the same room as a Campbell.”

“But it’s a birthday party, Grandma.”

“Who’s to say the food they give you won’t be poisoned. Never trust a Campbell, girl.”

The thought that the food might be poisoned had silenced his sister, and himself. He and SarahBeth were teenagers before he realized most people no longer even knew about the Glencoe massacre, nor cared about family feuds. But forming a sexual relationship with Fraser wasn’t possible and he’d never mentioned the man’s name to his family.

Fraser was leaning against their rented powder blue Honda, holding two steaming take-out cups. At first he’d thought the car was rather small, but having negotiated so many narrow roads, he’d quickly been glad it wasn’t any bigger.

Cam couldn’t help the smile that broke out over his face as he saw Fraser’s bright red hair and cheeky grin.

“Thanks for the coffee.”

“What makes you think one of these is for you? I’ll likely need both of them just to wake up so early.”

Cam laughed. Dammit every time Fraser opened his mouth he fell a little deeper into love with him.
Posted by Nicole Austin at 12:00 AM