Whether a military hero is a soldier, a sailor, a pilot, or a navy seal, those warriors are sure to capture a readers heart. I know they capture mine. Why? Because they risk it all for the greater good and what is sexier than that?

I've written on my own blog about how I love the warrior archetype when I write heroes and it still goes. Warriors give up their freedom, their families and even their lives to serve their country. They face hardship, terror, danger and injury every day of their lives and they do it for honor. To stand in the way of a foe who seeks to damage everything that they hold dear. It's a noble profession and those that serve aren't given their due often enough by the rest of us. They serve so we don't have to. They give so that we are safe. They're poorly paid and they and their families sacrifice a great deal.


To quote Wikipedia, "Veterans Day is an official United States holiday honoring armed service veterans. It is a federal holiday that is observed on November 11th. It coincides with other holidays such as Armistice Day and Remembrance Day, which are celebrated in other parts of the world and also mark the anniversary of the end of World War I. (Major hostilities of World War I were formally ended at the 11th hour of the 11th day of the 11th month of 1918, with the German signing of the Armistice.) 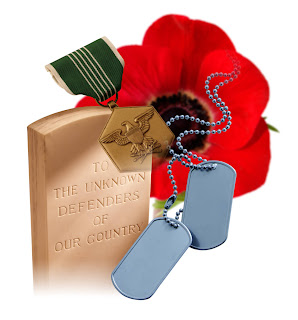 Veterans Day is not to be confused with Memorial Day; Veterans Day celebrates the service of all U.S. military veterans, while Memorial Day is a day of remembering the men and women who died while while serving."

Veteran's Day is about the sacrifice, not the loss. The risk, but not the grief. It's about giving thanks to those face tough odds everyday but persevere in the face of those odds.

Posted by Francesca Hawley at 10:55 AM