Excerpt from YOUR ONE AND ONLY by Nicole Austin 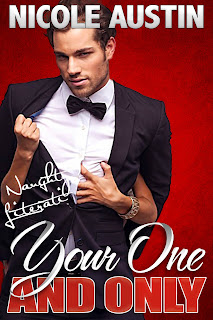 Blurb: My day from hell took a delightful turn when I woke up naked next to the most gorgeous man. But he’d bitten me and claimed I was his mate. Oh my!

Excerpt:
Bolting upright in bed, I clutched the sheet to my chest. My nude chest. My gaze shot around the room wildly, taking in the pertinent details. Sun shining in the window told me it was morning but I didn’t recognize my surroundings.

Holy crap! I was nude, in a strange room, in a strange bed with a strange man lying facedown next to me. Easing out of the bed so as not to disturb the sleeping man, I wrapped the sheet tightly around myself and backed up until I hit a wall, never taking my eyes off him.

What the fuck? Had someone slipped me a roofie at the club? I searched my memory and the last thing I remembered was walking away from my broken down car.

Doing an overall body check, my calves and feet were sore from walking and there was an odd throbbing at the curve where neck met shoulder but otherwise everything felt normal. No soreness or ache between my legs, thank goodness.

At least if I had to get abducted it had been by one hell of a gorgeous man. Damn was he ever ripped. Olive-toned skin stretched over more than six feet of muscular perfection. And his tight ass…wow. That was the kind of ass poets wrote sonnets about. An image of those well-muscled cheeks flexing as he thrust…

Cutting of that unruly train of thought, I noticed his thick black hair fanned out across the pillow he clutched with one powerful arm. His face was turned from me but framing his face the hair color varied from almost pure white to charcoal gray.

Images of a big black lion with the same coloring to its mane around his face filled my head, bringing back my hallucinations of talking to a lion while sitting under a tree last night. Was that last night? Perhaps I had been drugged after all. Sure would explain those odd imaginings.

There was something about the man. I didn’t know him yet I felt as if we shared a connection. Just looking at him created an ache in my chest. And I felt an almost magnetic force pulling me toward him. Everything in me wanted to crawl back into that bed and surround myself with his warmth.

I shook my head in an attempt to displace the odd sensations but it didn’t work.

The man stretched, extended his arm over the empty side of the mattress where I’d been and mumbled, “Come back to bed, Harper.”

He knew my name? How did he know me when I’d never met him? Trust me—having met such a magnificently gorgeous man is not something I’d ever forget.

When I didn’t budge, he rolled over and sat up, making no attempt to cover his nudity. Not that such sheer perfection should be concealed. The sinuous roll and play of muscle beneath taut skin as he moved was mesmerizing. My gaze traveled over a face that belonged on magazine covers, from dark eyebrows over beautiful amber-flecked brown eyes, down the straight slash of a nose to the sexiest lopsided grin and a strong jaw shadowed with just the right amount of dark stubble.

Unable to resist, I continued my journey taking in his broad shoulders, sculpted square pecs, what had to be an eight-pack abdomen, and then landed on…

Oh. My. While I’m no blushing virgin, I had never seen a monster cock like that before. With his knees slightly bent and spread, I had an unobstructed view. Semi-hard and it was still larger than any I’d previously encountered. And he had a full natural hoodie that had never been cut.

Could I take him? Sure would be fun to find out. Unconsciously licking my lips, I wondered how much of him would fit in my mouth. His cock jerked, elongated and thickened. Oh yeah. I definitely wanted to give that a nice long ride.

“Harper,” he growled. “Keep giving me that sex kitten stare and this is going to get really real, really fast.”
Posted by Nicole Austin at 12:00 AM