Excerpt from The Lake by Moonlight by Katherine Kingston 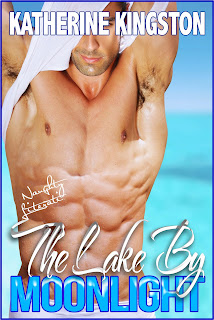 Blurb: Julie Forrester returns to Lake Como in Italy to evaluate some paintings for a former professor–and to re-evaluate her relationship with the man. Contemporary

Julie’s nerves had been winding tighter and tighter since she’d left New York ten hours ago. They’d squeezed into hard knots when she landed in Milan, and now, in the car carrying her toward the lake, her insides churned. She barely noticed the extraordinary smoothness and quiet of the hired vehicle or the buttery softness of leather upholstery in the back seat.

She wished she’d said no to the trip. She wished she could’ve said no. But that wasn’t really an option. Professor Antonio Farnese had asked for her specifically to come and assess the group of paintings he’d recently inherited. If genuine, they were worth a fortune, and it would be her job to convince him to donate or sell them to her museum for a reasonable price. It was a chance of a lifetime for someone so young, an opportunity that could make her career.

But really, that was only a small part of why nerves made her mouth dry and hands shake when she pulled a bottle of Perrier from the cooler.

It was knowing the real reason he’d asked for her specifically. Or maybe not so much knowing, as not knowing, but suspecting. Hoping, perhaps? Outside, twilight faded into darkness so she didn’t even have the gorgeous scenery to distract her.

Too soon, the car turned off the main road, into a side one, and then into the private drive that led to the villa overlooking the lake.

“Signor Farnese will meet you on the terrace,” the driver said as he opened the car door for her. “I’ll take your bag up.”

Julie got out and climbed the stairs to a terrace overlooking the lake. No one waited there, so she took a seat in one of the cushioned chairs surrounding a table. The professor had always had a flair for the dramatic. It didn’t surprise her when the door from the house slid open, though no lights showed, and a deep, masculine voice spoke. “Thank you for coming.”

“You made it hard to refuse.”

“Not the best part.” His voice poured from the darkness like molten chocolate, deep, dark, and dangerously rich.

He emerged onto the patio and approached. In the darkness she made out a tall, slim figure, in trousers and polo shirt. He walked with a noticeable limp, something new, and likely something he hated. She couldn’t make out much of his features. He set two wine glasses on the table, sat opposite her, and slid one glass across to her.

Julie took a long sip of a rich, fragrant Pinot Grigio. They sat in silence for a moment, until she said, “Professor? Why am I really here?”

She could just barely discern his features. “You are no longer a student. Call me Antonio. Or Tony, if you prefer. I asked you here for an opinion on my paintings.”

“That’s the excuse. It’s not the reason.”

“Getting right to the point? Then I will too. I plan to do what I wanted to do seven years ago when you were here. I want to seduce you.”

Breath stuck in her throat and her hands clenched into fists. “I’m not that naïve young woman anymore.”

“And I’m not the man I was either. The eight years difference in our ages hardly matters now, does it? I’m told you’re not married and not even seeing anyone seriously.”

“I was engaged for a few months.” She set the wine glass down. “But we broke it off by mutual consent. He wasn’t what I needed, and I wasn’t what he needed.” Let him read what he would into that. Unfortunately he was sharp enough to guess the implications.

He toyed with his wine glass. A stray gleam of light from the moon fell across his hand where it wrapped the glass and showed him running a finger up and down the stem. He had strong hands with long, graceful fingers and neatly trimmed nails. “You know that Sonia, my wife, died…was killed in a car crash almost two years ago.”

He drew in a harsh breath. “I was in the car with her and in the hospital for a long time afterward. Her family had to have the funeral without me.”

He stayed quiet for a moment. “I’m lucky I didn’t lose the leg entirely.”