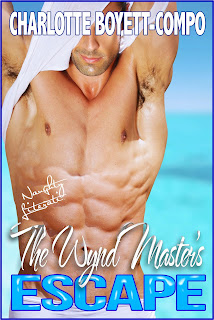 Blurb: A love as old as time can sometimes lead to a future one warrior never wanted.
Dark Fantasy, Speculative Fiction

Walking up the gangplank of her own Taoiseach model Fiach, Marisol was glad she hadn’t informed King Gabriel that she knew Santos Cabrera and knew him all too well. Of course knowing Lord Savidos he probably already knew of her association with Santi and that was why Gen. Strom had assigned her to the case in the first place.

As she slapped her palm to the control panel to shut the gullwing door of her craft, the WyndMaster flitted across her mind’s eye.
“Never could keep it where it belongs, could you, Santi?” she grumbled. She went to the pilot’s seat to begin her pre-flight check.

The Breasalian warrior was one hot piece of prime male ass, she thought, flicking switches and typing in coordinates. He was bigger than most Breasalian men—well over six feet in height and at least two hundred and fifty pounds of delicious male weight. With his thick black curly hair, eyes the color of onyx, the swarthy complexion of his race, and a chiseled body honed to absolute perfection, he ventured into serious eye candy territory. It was no wonder women couldn’t keep their hands off his hairy chest and mighty fine backside. That he didn’t try to discourage them from doing so put him squarely in the category of recalcitrant male whore.

Idly she wondered if the Akhkharusian emperor had relieved her old friend of that delightful appendage that so many women across the Megaverse had found so enthralling. That was generally the proscribed punishment for screwing the daughter of an emperor. It was what Ryden Bakari would do had it been one of his daughters.

“That would be a truly terrible waste to womankind if they’ve whacked it off, Cabrera,” she said, engaging the mighty engine of the Fiach.

She’d enjoyed that big, thick, juicy appendage and wouldn’t mind indulging her senses again in that regard. The man was a walking, talking gorgeous stiff cock on two legs. His swagger and strut alone were enough to make a woman come just by observing them. He had a deft hand and a kickass bod made for fucking and fucking hard. It was an experience she wouldn’t mind enjoying again.

“Maybe on the way back if you’ve still got your dangly,” she said then laughed.

Easing out of the docking harness, she turned the nose of her sweet dark-green baby and headed for the iris as it began to cycle open. Gaining a bit of speed, she waited until she had clearance to leave the station and as soon as she had permission, she let the Fiach rip.

Once she was off the station and outside the gravitational pull of Aduaidh Prime, she made sure the settings were correct then breathed a sigh of relief. Since the expensive piece of machinery could all but fly itself, she settled back in the plush body-form chair and thought about one night of heavenly bliss in the Milky Way Galaxy locked in the brawny arms of Santos Cabrera.

“You’re a lightweight,” he replied, rolling off her. “How’d you find me anyway?”

She hadn’t been looking for him but she wasn’t going to tell him that. Her embarrassing mistake when she’d blundered through the wormhole would give him an advantage over her she really didn’t want him to have. He didn’t need to know she’d literally stumbled upon him here in this backward world. Instead, she shrugged. “I’d never been to Terra and venturing into its distant past seemed like fun.”

“So you came after me in that distant past for…?” he questioned.

“You’re wanted on nine planets or have you conveniently forgotten that little detail, Cabrera?” she countered.

“I got a full pardon from the Burgon for any and all crimes committed prior to my becoming a WyndMaster or have you conveniently forgotten that little detail, Diaz?” he tossed back at her.
“You did?” she said. “If that’s so why isn’t it showing up on my data scan when I plugged in the tail number of your runabout?”

“You weren’t looking deep enough into the data?” he countered as he ran his hand over her right breast, thumbed the nipple then leaned forward to draw the hard little nub between his teeth.

“Why here?” she asked, looking beyond his shoulder to the flat-topped pyramid structure in front of which they lay under a canopy of trees. “Why did you come here?”

“Chichén Itzá has an interesting correlation to my Breasalian culture,” he answered around his hold on her nipple. “Probably to your Meicsiceon culture as well. We may have ancient ancestors in common with the Mayans who lived here. I suspect this land was settled by the Enchanters.”

She pushed his mouth from her breast. “The Enchanters?” Those words were enough to put an instant damper on any sex drive she’d been feeling.

He sighed and sat up—completely at ease with his nudity—and drew his knees into the perimeter of his dark arms.

“I’ve been looking at the hieroglyphs, doing some investigating. My guess is the Enchanters landed here, settled for a bit, made a few hundred brats as they were known to do then left.”

“Leaving the beginnings of still another mysterious culture behind,” she said.

“So where did they go?” she asked. “The ones left behind. This place seems deserted.”
“It is now what the quaint little Terrans call a vacation spot,” he said. “Sightseers come by on a daily basis to look at the ruins.”

“A tourist trap?” she asked, aghast at the notion. She was sprawled on the ground without a stitch of clothing—in broad daylight, no less—with a naked man sporting a second growing boner. She shot to her feet and dove for her clothes. “You son of a Diabolusian warthog bitch!”

He had the audacity to laugh at her. “Hey, it’s closed today. What’s your problem, Diaz? It’s not like you haven’t been seen naked by a hundred or more warriors.” He jerked a thumb over his shoulder. “Those columns there? They are part of the Temple of a Thousand Warriors. The more the merrier to see your cute little bare butt. I bet you’ve got them warriors rubbing out…”

“Fuck. You. Asshole,” she said, dragging on her uniform.

“Any time you want me, baby,” he replied, wagging his eyebrows.
She sat down to draw on her boots and ignored the way he was staring at her. Those wicked, hot eyes of his were devouring her and she could feel the sweep of his tongue along her folds beneath the crotch of her pants.

“Stop!” she ordered. “I know what you are doing with that evil mind of yours!”

He shrugged. “It’s my Enchanter heritage, Diaz. I can’t help it.”

“You can gods-be-damned well try, Cabrera,” she warned.

That beguiling smile that had dropped the knickers of many a defenseless female eased across his saturnine face and those black eyes with lashes so long they should be against the law slid slowly
down her body.

“Stay with me,” he said. “Just three nights. There is something very special that happens here in this place in the late afternoon during the spring equinox. That is two days from now.”

“What is it that happens?”

“You will have to wait and see,” he teased.