Excerpt from Fireworks At The Lake by Berengaria Brown 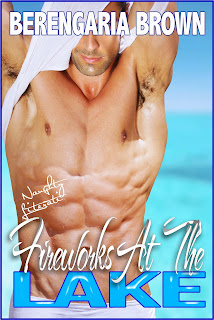 
Blurb: Andrew didn’t want to spend the Fourth of July long weekend with the people from the office so he goes to Lake Superior instead. There he sees Luke, a blond Viking who arouses every craving for love and lust inside him. But can he overcome his low self-esteem from when Rory rejected his love and open his heart to another man?
M/M

Andrew had spent most of the afternoon trying not to stare at the blond Viking stretched out on a lawn chair with the ripples from the lake running up and over his toes. The blond had removed his T-shirt and placed his Stetson over his face, but not before Andrew had seen the intense blue of his eyes and the sharp ridge of his nose. Since then Andrew had spent his time appreciating the Viking’s muscled arms and shoulders, his ripped abs and the long, long line of his legs—right down to the toes currently buried under an inch of water. Long, narrow toes, a fitting ending to the long, lean legs that disappeared inside baggy, knee-length shorts.

Likely, his view of the Viking was going to be the most exciting part of his Fourth of July weekend this year. Still, life wasn’t too bad. In fact, it could have been a hell of a lot worse. A bunch of the people from the office had planned to spend the day at a cookout in a city park. Andrew didn’t mind working with them, but he wasn’t ready to spend his vacation days with them as well, which was why he’d decided to come here to the lake for the three-day Fourth of July weekend.

Originally he’d planned to stay on the shore until the nine o’clock “family” fireworks display, then head back into the small tourist town for a meal before the midnight lakeside fireworks. But now his plans were liable to change. If the Viking stayed here, he’d stay. If the Viking went off with friends, that would be the end of his happy thoughts of getting to know the man. The only problem was, he hadn’t quite worked out how to get to know the blond yet.

Part of Andrew wanted to just sit and wait. The Viking had been lying there for a couple of hours already, and unless he planned to get quite wet, he’d have to move his lawn chair soon, as the tide was coming in. Likely when he stood up, Andrew could catch his gaze and say hello. Or something. On the other hand, it seemed rude to keep staring—or pretending not to stare—and not speak. But then, perhaps it would be safer to do nothing at all and just wait and watch. So Andrew waited and watched and tried to make up his mind what to do. Part of the problem was that his relationship with Rory had damaged his self-confidence.

He’d loved Rory passionately, far more passionately than Rory had ever loved him. Andrew had wanted them to live together, to settle down, to be a real couple, but Rory had never agreed to that. Gradually Andrew had realized that they were drifting apart, no matter how hard he’d tried to keep them together. Finally he’d understood that although Rory had been the man for him, he couldn’t fulfill Rory. After that had come a time of intense pain and anguish. A time when he’d wondered if he’d ever be enough to make another man happy. But that was last year, and Andrew was ready to try again. But only with someone who at least thought he might be able to love Andrew back.

Andrew stared at the Viking. He knew nothing about this man except that the blond was delicious eye-candy. However, something strong and powerful drew him to the Viking. Could this be his chance at happiness? Or would it be just another Rory who couldn’t return his love?