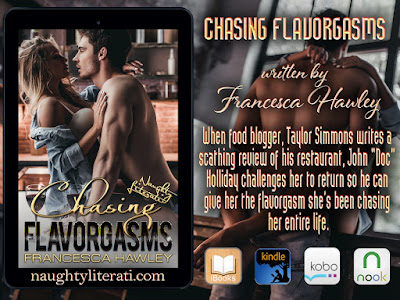 An Excerpt From Chasing Flavorgasms by Francesca Hawley


John “Doc” Holliday’s chair creaked as he leaned back after he’d finished reading the scathing review aloud. No other noise could be heard. He stared at the screen, somehow outside himself, frozen. He remembered intimate dinners with Taylor. Times when she’d moan in pleasure at the food he’d created for her. But this was the best she could do? Anger slowly bubbled up. Twisting his gut. Heating his face. He reread key phrases silently, clenching his hands to keep from pounding on things.

She’d never faked it before! He boiled out of his office chair and spun around. Staff scattered. Hid.

“Who the fuck is Growler?” he shouted. No one spoke. “Where is the motherfucker’s nice ass? I’m going to rip a hole in it deep enough to shove an overpriced bottle of wine!”

He prowled from his office into the kitchen to vent his wrath on the defenseless china, hurling plates against the wall. They shattered in a satisfying crash.

Doc whipped around and stalked toward his maître d’ and front of house manager, Chris Mitchell. Chris flinched but faced up to stalking lion.

“I fired him as soon as I read the review.”

“Damn straight.” Doc took a step off, turned and leaned on the counter.

“I don’t think you need to worry about that. Front of house is my purview.”

“No, Doc.” He turned but Chris threw up his hands. “I don’t want to bail you out of jail ever again.”

Chris was right…as usual. Leaning against the counter, he dropped his head and crossed his arms over his chest as the rage dissipated.

Doc looked at Chris. “Never again. Take that table out.”

“Then we fucking lose two seats. No guest is going to be hit by the kitchen door ever again.”

“Where do we put the table?”

“Get rid of it. Give it to someone on staff. Donate it to charity. I don’t care. Lose the table.”

“Find a place to store the chairs but get rid of that damn table.”

“This was last Wednesday, yes?”

“You were out sick, which you never are, and the walk-in died. We had to throw everything out.”  He shook his head. “I went hunting for caviar but had to use salmon roe. The brine made it too salty.” He glared at his sous chef, Joni Michaels. She blanched but stood straight. “I ordered another rinse then it should have been iced.”

“Your orders were followed, Chef.”

“Then how the fuck did we serve warm overly salty caviar? A clear water bath would have leached out the extra salt then the roe should have been served on a bed of shaved ice.”

“It was. Perhaps she was overly sensitive to salt?”

“Definitely not.” He eyed Joni. “Is it possible the roe went back into the brine rather than clear water?”

She frowned, thinking back. Her cheeks reddened then went deathly pale. “Yes, Chef,” she whispered. “Do you want my resignation?”

He shook his head, rubbing his hands over his face. “It’s my responsibility. I should have tasted it before it left the kitchen. The food fuck-ups are on me.”

It was his kitchen. His restaurant. All the damn fuck-ups were on him. He sat on the counter and eyed Chris.

“Is the Piece of Shit POS system fixed and the back-up book found?”

“The point of service system was repaired the following day.”

He wracked his brain about how those problems might have happened. Growler had to have been Ted. He wasn’t here and he’d been the idiot who’d let “Billy the Kid”

McCarty in the employee entrance.

Billy. The epitome of a frenemy – best friend and worst enemy – and the owner of rival restaurant, Fucile da Caccia – Italian for “The Shotgun”.

“I think we can lay the computer problem and the book at Billy’s door. He wouldn’t fuck with the food, but the other? Oh yeah. I can see him messing that shit up.”

“Ted let him in early in the afternoon.” He tilted his head. “Find out if Ted landed on his feet and is working at McCarty’s place.”

“Oh come on. We both know that Growler was Ted. Billy might have poached him while encouraging him to do a bit of damage on his way out. Or the incidental damage may have been Ted’s idea.”

“Ted was getting the idea that his shit didn’t stink,” Chris sighed.

“He also thought he was a better sommelier than you are.”

“He what?” Chris bristled, his eyes narrowing.

Doc laughed. “I thought that might piss you off. Don’t worry, bro. Ted sucks as a sommelier. You have nothing to worry about. You’re the best damn maître d’ I’ve had running any of the places I’ve worked in.”

They fist bumped and Doc laughed.

“Still it wouldn’t hurt to run the front of house staff through some additional training.”
Chris nodded, “Yes, Chef. That’s a good idea. I’ll call people to come in early for their shifts. They’ll want to be paid.”

“They will be. And let’s do regular training for a while. Include some practice on what to do if you’re not here and if we have problems during service.”

Doc frowned. That didn’t fix the current situation though. That review wouldn’t ruin him but it damn well wouldn’t help. The young and trendy foodies in San Francisco followed her blog so they knew he’d been dissed.

He could find a friendly newspaper and lie his ass off, claiming she was full of shit. It might even work. In the old days, that’s exactly what he would have done. But in the last few years he’d been attempting to grow up and take responsibility for himself. And the truth was he’d fucked up. He hadn’t been on his game lately. So how did he fix it?

He wanted a second chance with her, in more ways than one. 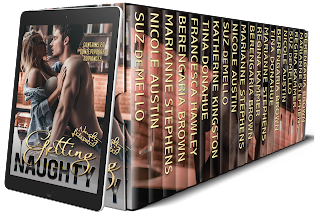 Posted by Francesca Hawley at 9:06 AM