Introducing GETTING NAUGHTY! by Suz deMello 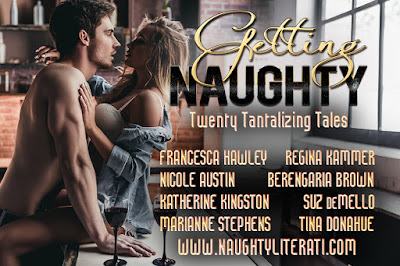 We in the Naughty Literati have been working our fingers to the bone getting out another anthology of romance fun! This collection is Getting Naughty: Twenty Tantalizing Tales.

One of my stories in this set is Alice's Sheikh, something I've been working on for a long time. While you might think that a sheikh story is too cliched/romance-y for the wild and wicked Suz deMello, you'd be wrong. In my mild-mannered persona of Sue Swift, I sold two sheikh books to Silhouette Romance, a now-defunct division of Harlequin--and they were both bestsellers. I am not the most canny of businesswomen, but even I understand that success leaves clues, and two bestselling sheikh books could mean a third bestselling sheikh book.

's Sheikh is part of a miniseries called A Fortune to Win, available for preorder at https://www.smashwords.com/books/view/763321.

The premise of the trilogy is contained in the Prologue to 's Sheikh:

[] The jetsetting couple known as ‘Marvey,’ Harvey Winningham, Lord Darlingside and his supermodel wife Mara Tove, were found at three a.m. today (local time) drowned in the historic Trevi Fountain. An autopsy is planned, which many fear will confirm the initial assumption that the couple’s known heroin addiction caused their deaths. Reportedly, used syringes were found on the fountain’s marble balustrade… They leave three adult children: Peter, age 26, the new Earl Darlingside; daughter Alice, 23, a teacher; Sophia, 19, a model.

CONTENTS OF ‘MARVEY’ WILL REVEALED

[LONDON] …Though the Winningham family solicitor, Rabbie White of White, Cheshire and Queen (Lincolns Inn Fields) remains closemouthed, an unidentified source close to the family states that the Winningham fortune, encompassing a manor house in Kent, a mansion in Hampstead, and invested monies totalling some 50 million pounds, will be divided between ‘Marvey’s’ children. However, the ‘Marvey’ trust requires the heirs make a substantial non-monetary contribution to society. Whether each child’s acts are sufficient to inherit is a decision left solely to White’s discretion. Apparently Lord and Lady Darlingside wanted to ensure that their progeny did not follow the same dangerous path they trod…

Here’s a snippet to pique your interest:

The clatter of gunfire shocked Alice Fortune into brief immobility. Dropping everything, she ducked for cover under the nearest row of shabby seats. The terminal’s interior lights went out, leaving a blackness so absolute that it warned of a widespread power outage. Even the car park’s lights had ceased twinkling through the grubby windows.

Shouts in a language she didn’t recognize pierced the air, but otherwise, the little terminal was deathly still. She wondered if airport personnel knew of an impending attack, for she was alone. Her heart banged against her ribcage, and she told herself to stop inventing tales to scare herself more. Wasn’t the situation frightening enough?

Sticky sweat poured off her body while the terminal, without air conditioning, rapidly became sweltering. She huddled deeper behind the dubious sanctuary of the chairs. After her eyes adjusted, she dimly perceived lumps in the darkness—her luggage, including her satchel. She reached for the satchel with a hesitant hand, but it was inches beyond her grasp. Sprawled beneath the chairs, she wondered if she could take a chance, scoot out and grab her most valued bag.

I am not a ditherer, she told herself. Fortunes do not dither. We fling ourselves headlong into whatever fate tosses our way.

A distant motor rumbled, the sound growing louder, coming nearer. She wriggled out from underneath the chairs, reaching for the satchel’s sturdy leather strap.

A door flew open and whacked the opposite wall. Bright lights stabbed through the thick gloom, streaming through open double doors opposite the terminal’s street entrance. Silhouetted against the light was a man, tall and muscular. He strode into the room, grabbed her questing wrist to haul her out from under the chairs and onto her feet. “Hurry! We haven’t much time!” he shouted over the beat of a helicopter’s blades, the growl of its engine.

She stumbled, and her ankle twisted. With a yelp, she regained her footing and jerked her wrist away. “Who are you?”

“Harry Ashraf. I came to pick you up. You’re Alice Fort, aren’t you?” His firm, commanding voice reflected an education and much impatience.

Harry Ashraf. She peered more closely at him and, despite the dim and shifting light, recognized him from photos she’d seen: Sheikh Haroun ibn-Ashraf al-Aghiba, her employer. Hot Harry, the tabloids called him. The appellation was beyond apt. Large dark eyes, fringed with lashes a woman would kill for, plus cheekbones higher than Everest and a mouth made for deep kisses.

A masterful attitude that made her think of hot sex and multiple orgasms. Not that she’d ever experienced either, but she read a lot. And hoped. And dreamed.

“So come on. We haven’t much time. The rebels have cut the power lines and they mean to take the airport.” He seized her again, and wisdom told not to resist his strong grasp.

But Fortunes tended to be impulsive, not wise. She tugged her wrist out of his hold and went for her satchel.

“Leave your bags. Everything you need is at my palace.”

“How do you know what I need?” she shouted at him, straining to be heard above the helicopter.

“Listen to me! Are these objects, these bags, worth our lives?”

He threw up his hands. “Fine, fine! But come on!” He sprinted toward the doors.

She grabbed her satchel by its strap and stumbled after him, passed through the double doors and into a tunnel, the illumination provided by the helicopter’s lights at its end. He was far ahead of her, and she feared she was slowing him down too much.

Without warning, he turned and tackled her, shoving his shoulder into her midsection. He straightened. Grunting, she folded over his shoulder, draped over him like a poncho.

He ran for the helicopter. clutched her satchel’s strap with one hand and a loose bit of Harry’s camo flight suit with the other. Upside down, she squeezed her eyes shut to avoid getting nauseated, and found herself overwhelmed by other sensations. The hardness of Harry’s body. His male scent. His strong arm wrapped around her thighs, holding her securely.

Desire thundered through her, but how could she be thinking about sex? She squirmed. His grip tightened, and need rushed through her in hot, unwelcome waves. Control yourself. She breathed deeply, hoping she’d calm.

He raced through the tunnel, out of the terminal, and pounded across a short stretch of tarmac to the waiting bird. His arm loosened, and he slid her down the length of his muscular body, then set her on her feet. Gently.

A wave of dizziness that assailed her. She swayed.

He caught her around the waist. “Hang on.” His arm was around her, secure and strong.

She gulped and grabbed onto the front of his flight suit. His chest was solid beneath her scrabbling fingers. She looked up, meeting his gaze.

He smiled into her eyes, and her heart jumped. Then she remembered who he was—her boss—and let go of him. He opened the door of the ’copter and said, “Get in.” Gunfire popped, a little closer, and she gasped. He boosted her up and into the small round cockpit, seemingly without effort. After he ran around to his side of the ’copter and jumped in, she noticed he wasn’t panting, didn’t show the slightest sign of exertion even though he’d just carried a fifty kilo woman fifty feet and lifted her another ten.

She slid into the ’copter’s seat, then set her satchel on the floor next to her feet, relieved to hear no clink of broken glass or scrape of shattered pottery. Fumbling at the unfamiliar, many-strapped seat belt, she tangled it completely while Harry secured himself and lifted the bird into the air.