An Excerpt From Royal Brat by Nicole Austin 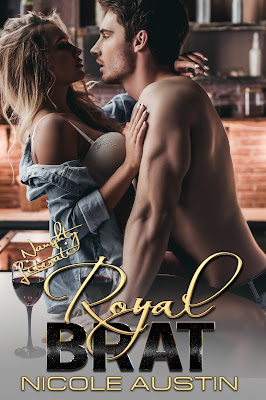 Loving two men, my stepbrothers, got me exiled to a foreign country. Without them I’m lost and alone, cast adrift on turbulent seas without a compass or rudder. In order to finally be together we’ll have to navigate a course through the landmine infested waters of my traumatic past.

Standing on the circular drive, a lone suitcase by my side, I stared at the massive brick mansion with a knot of dread in my belly and feeling lost, cast adrift on turbulent seas without a compass or rudder. Wasn’t coming home supposed to bring a sense of warmth and belonging? Perhaps it did for some, but then this had never truly been my home.

An empty pang of loneliness tightened my chest. Considering how many times my world had been turned on its axis over the past decade, I should be accustomed to swift changes and adapt easily to new situations.

A heavy sigh left me as I looked up to the gray skies and a fat, fluffy snowflake landed on my cheek, followed rapidly by several more. Taking the handle of my suitcase and heading for the beautiful wood and glass doors, I cringed at the bone-rattling clatter created by the wheels rolling over the stone drive. The only thing louder was the thumping music coming from inside.

Reaching the sheltered entryway, I fingered the key in my pocket and fidgeted with indecision. Since my stepbrothers hadn’t been at the airport to pick me up, I had no idea what kind of reception my return would receive. What was I supposed to do? Walk right into the house I am one-third owner of? Knock and wait to be invited in? Considering how the place was lit up like Christmas and thrumming with music someone had to be home.

The decision was taken out of my hands when the door flew open and a large fist wrapped around my arm, pulling me into a confusing whirlwind of activity. A big sandy-haired guy in a University of Tennessee Vols jersey shoved a red solo cup in my free hand then leaned down and sealed his lips over mine, forcing his tongue into my mouth.

Shock kept me from immediately responding to the wet, sloppy kiss as the taste of cheap beer assaulted my senses. Soon as my brain caught up with the unexpected molestation, I let go of my suitcase and shoved against his broad chest with both hands, splashing cold beer over both of us. When the stranger stumbled back, I gasped for air.

What the actual fuck?

Hip Hop music echoed through the massive two-story foyer so crowded with intoxicated men and women that I couldn’t see past them into the great room. People loitered along the length of the curved grand staircase and littered the hallway above where a meathead jock bent a coed backward over the baluster, her brown hair streaming downward, showcasing the long drop.

One hand slapped over my mouth and the other grabbed my suitcase, which I used as a battering ram to get past the throng of partygoers. Through the great room and kitchen, I fought my way up the back staircase and into the family wing. Bursting into my bedroom, I set my bag aside and turned to find a half-dressed girl grinding her body over a nude guy in the middle of my four-poster bed.

“Get. Out,” I gritted from between clenched teeth.

My demands for the couple to leave went unacknowledged. Feeling dirty and violated, I stormed through my bathroom and into the walk-in closet to grab my old baseball bat. This time, when the couple got a good look at me, they quickly fled.

With the bat cocked over my right shoulder and fury rolling off me in waves, people got out of my way as I stormed down the hall. Grady’s door stood wide-open and I charged inside, coming to an abrupt halt at the obscene sight that greeted me.

I’m not a prude by any means but damn, I had never witnessed something so… Just damn.

During the year I had lived with them, the rumor mill had buzzed with speculation about their sexual activities. Specifically, a predilection for fucking the same girl. Together. At the same time. Making her the center of a Forbes brother sandwich. While the idea set fire to my fantasies, I’d never actually thought the stories were true. But seeing really is believing.
Posted by Nicole Austin at 12:00 AM