An Excerpt from Silent Sky by Regina Kammer #ContemporaryRomance 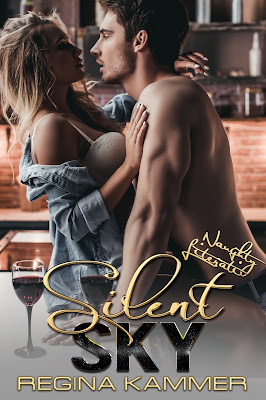 Part of the Getting Naughty: Twenty Tantalizing Tales anthology

Blurb:
I watched in horror as the twin towers collapsed, trying to remember if I’d told Scott I loved him before he left for New York.

“Jennie?” said the gorgeous guy I’d been ogling surreptitiously since the second he’d walked through the front door. “Hi. I’m Scott. Happy Birthday.” He stuck out his hand.

I smiled and tried not to melt under the intensity of his olive-green gaze as I shook his hand. His grip was strong, assertive, and compelling.

It was my thirtieth birthday and my friend Daphne was throwing me a “bring a single man” party at her flat in San Francisco. All my girlfriends were partnered, but I was the black sheep of the bunch. Perennially single with a string of atrocious short-term boyfriends and one-night-stands.

I met a lot of random guys that night, some of them even gay. (“Well, he’s single!”) Scott arrived late, and I had turned at the sound of the doorbell in hopeful anticipation. He chatted with Daphne briefly before heading straight over to me, wending his way through the cliques of party guests. My heart pumped blood to flush my face, frustrating my attempts to maintain my cool.

Physically he was everything I had fantasized about—and more. Tall, but not too tall. Green eyes, but a shade I had never expected. Brown hair, longish and tousled. Athletic frame covered by a button-down shirt and black jeans. Which meant he actually thought about what to wear to a stranger’s birthday party. He posed gallantly before me with one hand behind his back, as if he were going to bow.

“Hi. Thanks,” I said, still a little dazzled by his perfection.

“I’m a friend of Dave’s—Daphne’s brother.” He glanced around at the noisy throng. “Sorry I’m late. I’m working on this big report. I had to get it done.”

“You’re not late. We haven’t even had cake yet.”

“It totally is, isn’t it?” I giggled, nervousness edging my mirth. “And now you’re here we can get the party started.”

Lines like that were usually how I got all those losers in bed.

Except Scott blushed. And pulled his hand from behind his back to present me with a beautiful bouquet: red carnations set off by orange dahlias and yellow sunflowers, splashed with a touch of baby’s breath.

I think I gasped. It was by far the most romantic thing anyone had ever done for me.

After that, except for the few moments I was expected to blow out the candles on my cake, I found myself by Scott’s side the entire night.

Regina Kammer is a librarian, an art historian, and an award-nominated, best-selling, multi-published writer of erotica and historical erotic romance. Her short stories and novels make history sexier, whether the era is Roman, Byzantine, Viking, American Revolution, or Victorian. She’s even sexed up contemporary settings, Steampunk, and Greco-Roman mythology. She has been published by Cleis Press, Go Deeper Press, Ellora’s Cave, House of Erotica, Story Ink, Loose Id, The Naughty Literati, and her own imprint, Viridium Press. She began writing historical fiction with romantic elements during National Novel Writing Month 2006, switching to erotica when all her characters suddenly demanded to have sex.