Excerpt from Buy Me a Rose by Francesca Hawley 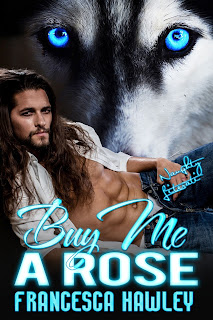 Blurb:
Jessica and Nathaniel Whitewolf celebrate their thirtieth anniversary as True Mates but they’ve lost their bond. Now a hot couples’ retreat will get it back.

She heard his step on the stairs and dished his bacon and eggs onto the plate. Right on schedule. Just like every morning. He walked into the kitchen and absently kissed her cheek as he sat down at the table. He ate neatly, as he always did.

Jessica Whitewolf watched her True Mate as he read the paper, his forehead knotted in thought. He’d been so focused on a case lately. One of his patients was late in a high risk pregnancy and he had been seeing her often so that she’d have a healthy pup.

Jess knew she shouldn’t feel jealous, the wolf bitch needed Nat’s attention. Sadly though, Jess couldn’t remember the last time her Mate focused so keenly on her. She fought the envy down and choked it off, wishing the best for the expectant mother.

“What are your plans today?” she asked.

Jess could almost predict what he’d say even though they rarely used their True Mate telepathic bond anymore. He’d talk about spending the day at the clinic and checking on his special case. Then he’d get up, give her a quick kiss and tell her he’d see her tonight.

“It’s a clinic day. I’ll be slammed all day with office visits.”

“Any interesting cases? How is Missy Goldwolf doing?”

Jess smiled. Nat was a stickler about confidentiality. “She’s pregnant. She’s had a difficult pregnancy and everyone in the entire valley is holding their breaths hoping she’ll carry to term. It isn’t hard to figure out, honey.”

He rose and crossed the room. “I suppose not. She’s holding her own. I’m just glad that Yohana approved the upgrade to the obstetrics and neonatal units at the hospital.”

“Well, considering she’ll need it soon herself, it was a no-brainer for the council.”

“She didn’t know that at the time it was approved, but my thanks to the council,” Nat smiled and gave her a wink since Jess was part of that civic body. “I better go. See you tonight, right?” He kissed her cheek, picked up his briefcase and headed for the front door. Jess followed.

“Hmm?” he asked absently as she followed him.

“Anniversary cards,” she hinted. “For us.”

“That’s nice.” He opened the door and left without turning around once. She watched him walk to the car and waved as he drove away. He didn’t wave back. She wasn’t even sure he’d seen her.

Jess sighed. When had this happened? When had they become so comfortable and…boring. She turned around and went inside to wash up in the kitchen before she headed over to her landscaping business.
Posted by Nicole Austin at 12:00 AM