Excerpt from How The Alien Stole Christmas by Belle Scarlett 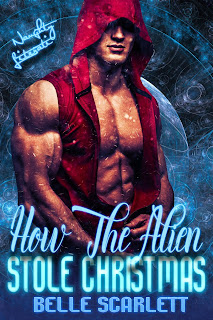 Blurb:
On board a deep space station, Christmas Trent learns her sexy cyber lover, who may not be human, wants to steal her for his own.
*Published in a previous Naughty Literati anthology.*

I asked if you understand me, soldier.
Christie needed release, and she needed it now. She gulped some air and started unzipping her flight uniform in anticipation of the next phase of their play.
“Yes, sir. I understand. Please, sir, permission to touch myself?”
The computer was silent for a moment. Then Blitz’s next message unfurled across her vid-screen.
Permission denied.
Christie froze in disbelief, her hand in mid-zip on her flight suit.
What? She glared at his words. Screw that, she thought rebelliously, and seriously considered disobeying a direct order from him for the first time ever.
Blitz seemed to read her mind.
Don’t even think about it, sweetheart. I’ll know if you’re being naughty or nice.
Frustration sizzled through her as she stopped unzipping her suit. Damn her submissive streak. She hadn’t even known she possessed one until she’d encountered Blitzen. As an experienced sexual dominant he had recognized her latent submissive qualities right away, and quickly set about training her in the art of pleasing him during their online play. Now her body wanted to do whatever he told it to do. And that was starting to prove freaking inconvenient.
“Ha. What can you do about it from there? Text me a lump of coal for my stocking?”
Don’t sass me, soldier. You don’t want to find out what I can do about it if you disobey me.
Christie bit her lip. For better or for worse, her sexual satisfaction was now tied to his and she knew it. If he didn’t want her to come, her body would side with him even if her mind was furious at them both.
He was probably just teasing her, as part of the cyber play. Maybe some more sugar would help matters.
“I’m sorry, sir. Please? May I come?”
I like when you beg me, Mistletoe. I grow even harder for you.
“Is that a yes?” She asked hopefully.
Nope. My order stands.
“I can’t believe this!” Blitzen had never seriously forbidden her to climax before.
Believe it. I own your next orgasm. It’s mine. From now on, you will save that delight for me to share, control, and enjoy.
She shivered. He couldn’t be serious. Who knew if they would ever even meet, or when?
“You’re ruthless, you know.”
Yes. And you’re sexy as hell and hard to resist. But I mean it, princess. The next time you climax it will be with your wet pussy tight around my hard cock, squeezing me with every thrust until I come deep inside you.
Christie instantly pictured them together on a large bed in full-on, carnal coitus. Her clit twitched in spasm, yearning to uncork the full orgasm bottled inside her pussy. She could feel her back arch in aroused response.
Damn, this guy was good. He had tuned her fantasies so well over the past two months that she could envision every sexy detail he described exactly as if he was in the room doing it to her.
Okay, okay! I surrender, already,” Christie half groaned, half laughed. She struggled to get her rioting body back under control.
It’s not my fault you have a hair-trigger libido, sweetheart.
She could almost hear his warm, male chuckle in her ear.
“You wouldn’t be able to get me so aroused so fast if your titillating star messages took days instead of seconds over sub-space frequencies,” she grumbled.
Wanna bet?
Posted by Nicole Austin at 12:00 AM