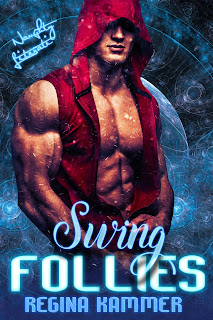 Blurb:
Blimey. Delia’s besotted. With Edward. But when an old flame from Edward’s revolutionary past swings by and steams up the laboratory, has Delia missed her chance at love?
*Published in a previous Naughty Literati anthology.*

Newcastle, England
April 1879
Professor Edward Ockham gripped the ratchet handle more tightly as a frisson of lust roiled within. Before him his lovely assistant Delia Bennett awkwardly adjusted herself in a swing suspended four feet above the linoleum, her skirt and petticoats in riotous disarray. She was charming in her helplessness. Her arms, secured by leather wrist cuffs, stretched above her head. Her stocking-clad legs, extended and splayed, were held in the air by silken slings supporting each ankle and knee. Her rosy cheeks and bemused expression were slightly at odds with the bizarre eroticism of her predicament.
“Delia?”
The sound of her name tripping off his tongue echoed like a melody in the cavernous laboratory, the gentle hiss and thrum of the boiler adding a syncopated undertone.
Delia. No longer the more formal Miss Bennett during working hours. She was, by agreement, Delia.
He could say her name over and over and over again. Delia, Delia, Delia.
Her chocolatey eyes widened. “Yes, Profess—Edward?”
Edward. She was Delia and he was Edward.
“Are you comfortable?”
She wriggled her buttocks, each pillowy cheek cradled in its own sling leaving her quim exposed to the air. “Perhaps something across my bum, you know, a bolster above the crack—” She suddenly blushed crimson to the roots of her raven curls.
The door to the laboratory swung open with a dramatic flair.
“Well, well, well. What have we here?” Sebastian Broadchurch sauntered in from the hall, a little rumpled from whom and whatever he had done the night before. He stopped before Delia, his predatory stare traversing her as he combed his fingers through his flaxen hair. “Our Miss Bennett finds herself in yet another delicious quandary.”
“Good morning, Sebastian.” Edward arched a brow. Morning had but a minute left to it.
Sebastian brandished a scowl before turning his attention to the rigging holding Delia. He pursed his lips as he studied the mechanism. His gaze followed the silken slings upward to where they attached to a swivel bolt mounted to a cable. He perused the cable to where it connected to a system of belts and pulleys housed on a sturdy wooden frame. He glanced at the diminutive steam engine then grunted in comprehension as he took in the exposed gear shaft and long ball-end lever of the control box.
“It spins, does it?” he said.
“It does,” replied Edward.
Posted by Nicole Austin at 12:00 AM