Excerpt from Were the Hell? by Berengaria Brown 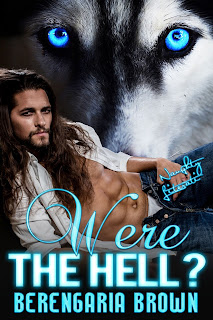 Blurb:
Septimus has to learn why no female weres have been born into his pack. When he walks into the meeting room he smells his mate. A male.

Septimus had sometimes wondered if he’d only ever been sexually attracted to other males because there were so few younger females in his pack, and the few there were didn’t light his fire. But the minute he walked into the meeting room with the weres from the Forest Hill pack, he knew he was genuinely, one hundred percent gay. He could smell his mate.

His cock stood up and fought to get out of his jeans, stretching the fabric so tight that he was going to have blue balls for a week. The tiny hairs on the back of his neck were also standing straight up. His skin tingled, electrified with sexual arousal. And the scent of his mate was overpowering him, dragging him into the room with almost physical force.

His nose led him unerringly to his mate—a tall, lean man of about thirty, with tanned brown skin, dark brown hair, and liquid chocolate eyes. Those eyes were staring at him, and the man’s strong nose was flared, smelling his scent. From the huge bulge in his pale cargo pants, the man was every bit as aware of him as he was of Mr. Tall, Tan, and Delectable.

As Septimus walked across the room, his cock leading the way, the man moved to meet him. Their gazes were locked, and Septimus was totally oblivious to everyone else in the room and the task he’d been sent to do. He was about to put out his hand when the other man reached him and grabbed his shoulders, pulling him in for a hard, body-blending hug.

“I’m Dai. We’re mates.” The words were harsh, bitten off, said almost as a challenge.

The Alpha of the Forest Hill pack stood just a few feet away. He coughed, cleared his throat, then said, “Gentlemen, let’s get this meeting underway. Dai, you should sit next to Septimus, not in your usual place.”

So even the Alpha smelled their attraction. That certainly proved he was not being misled by his cock.
Posted by Nicole Austin at 12:00 AM