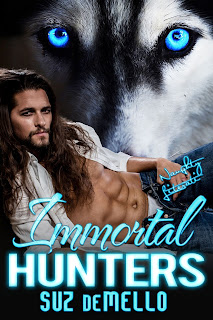 Blurb:
Vampire Rama avoids attention by working nights as a private investigator. No one cares if some bad guys disappear on her shift. Then Detective John van Helsing shows up. Bearing the name of the vamps’ greatest foe, he interferes in her case and in her life. Friend, lover or enemy?


Being a vampire can suck… Oops, sorry about the bad pun. Well, it’s true, it can bite… Yikes, there I go again. What I mean to say is that it has its ups and downs. I’m virtually immortal, which is pretty cool. My hair and nails don’t grow, but when I awaken, they’ve been restored to the state they were in when I became undead. It’s inconvenient, since I grew up in a shithole with no running water. A mani-pedi was not merely unavailable but unimaginable. I was an unkempt mess when I was changed, so every evening when I awaken, I devote an hour or two to personal grooming. My long black hair is a no-brainer. Up it goes into a French twist or a braid. Nails are more difficult.

So there I was one night on surveillance, tucked into the comfy front seat of my undistinguished Camry in a dark corner of Santa Martina, contemplating the choices I faced—Mango Madness or Ruby Delite? Through my increasingly foggy windshield, I occasionally cast a glance at the crappy apartment half a block away where I’d run my quarry to ground. Soon I’d take him, after the lights were doused and he’d fallen asleep.

I work for a private investigation firm, and my boss understands my rules. First of all, ask me no questions and I’ll tell you no lies. Second, night jobs only.

And if a bad guy or two—or three or five or seven—disappears during my shifts, nobody really cares. Operating in Santa Martina is especially convenient due to its location, the northern California coast. Offshore lies a marine mammal sanctuary. Because of the plethora of seals and otters, lots of great whites come to call. The occasional surfer gets chomped. Bodies disappear, or they may wash up on shore, drained of blood.

As I was saying, there I was one night, picking at a chipped edge of the Ruby Delite flaking off my left index fingernail when someone tapped on my window.

I could see a uniform, so I unrolled. “What’s up, officer?” I asked in a pleasant tone. No sense offending local law enforcement, you know.

“We’ll have to ask you to move along, ma’am,” he said, an officer at his most officious.

We? I looked beyond the uniform and there he was—a suit. An undercover dick on my turf.

In gray pinstripes, he would have been as inconspicuous as I if it hadn’t been for his cornpone, white bread, wheat-fed wholesome handsomeness. Blue-eyed and blond, he would have screamed “farm boy” in TV Land, but in California most farm workers are Hispanic or Asian immigrants.

“Well, if it isn’t John-Boy Walton,” I drawled.

He drew closer, no doubt taking in my black hair, black eyes, black leather, red slash of a mouth and white, white skin. ”Well, if it isn’t Ms. Goth Barbie,” he drawled. Back atcha, honey.

I couldn’t stifle my smile. I like a man with a quick tongue—they have more than one use. “It’s Hestia, actually. Hestia White.”

“Hestia? The Greek goddess of hearth and home? That’s incongruous.”

My smile broadened. I knew few men with “incongruous” in their vocabularies, and fewer still who knew the meaning of the name I cynically used. I liked him. Shame I had to run him off.

He leaned against my door panel, ignoring the condensation wetting his elegant gray pinstriped sleeve. “Well, Ms. Hestia White, you do need to move on out. Police business.”

I lounged back in my seat. “But I kinda like it here.”

“Why? This isn’t the nicest part of Santa Martina. Completely lacks the charm of the marina or the nightlife in downtown.”

I looked into his blue, blue eyes. “I prefer down and dirty.”

He met my gaze without faltering. “I could arrest you for loitering.” He leaned closer, partway into my window. “Take you in. Lock you up.”

“Actually, Ms. White, we’re on the job.” His voice had gone crisp and businesslike.

“Actually, Detective Whoever, so am I.” I flipped open my wallet to flash my P.I. license.

His eyes widened. “How come I’ve never heard of you?”

I shrugged. “I keep a low profile. Safer that way. Hey, I’ve shown you mine, so why don’t you show me yours?”

I’d teased out a reluctant smile, one that reached deep inside to heat me from my brain to my box. Yes, that box. I was surprised. Mortals don’t usually turn me on.

He reached for his wallet to show me his shield and I.D. John van Helsing. A tremor ran through me, ruffling the tiny hairs on my nape and my arms. Was it chance that this detective bore the name of the most famous enemy of my kind?

“John-Boy,” I said with phony delight.
Posted by Nicole Austin at 12:00 AM