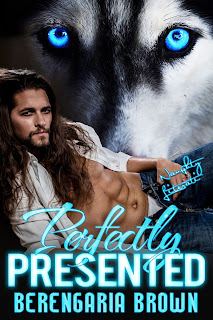 Blurb:
Blake sees Xavier agonizing over unclaimed gift tags for poor children on the holiday tree. Will Blake tell Xavier about his past and his problem?

Blake stood and walked behind Xavier’s chair, resting his hands gently on Xavier’s shoulders, and then massaging them. Xavier felt his tight muscles loosen a little as Blake’s fingers dug into the tense tissues, working on the knots, Blake’s thumbs pressing and rolling into each bump.

Xavier rotated his neck and head, and then leaned forward, relaxing into Blake’s firm touch. “Hmm, that feels good.”

Blake moved his hands around, pressing and working all the stiff areas until there were no hard lumps left. His hands stilled momentarily before he slid them down Xavier’s back and up under his sweater and shirt. They glided over the taut back muscles, up Xavier’s spine and around over his sides, down, then up again. This time his fingers moved around to the solid chest wall.

Xavier stood, turned into Blake’s arms, and wrapped his own around Blake. “Maybe it’s time to move this party into the bedroom?” The two men were almost the same height, a mere fraction under six feet, so Xavier tilted his head to the side to kiss his friend.

The kiss was sweet and gentle, a brief butterfly touching of lips to lips, until Blake grabbed Xavier’s head and held it still so he could lick along the seam of Xavier’s mouth. As Xavier opened up, Blake’s tongue slid inside, teasing and tasting and testing. First along the insides of his cheeks, then behind his teeth, and finally to tangle and dance with Xavier’s tongue.

Blake’s fingers burrowed into Xavier’s black hair where it curled on his collar at the back of his neck.

Blake stroked the neck underneath the curls, angling the other man’s mouth more fully over his own, then sucked Xavier’s tongue into his own mouth.

When they finally drew apart, both men were panting, not just from lack of oxygen, but also from the power and passion of their kisses.

Blake pulled Xavier hard against him from hips to chest, his arms like steel bands around the other man. Their cocks rubbed against each other, two long, hard ridges, their heat obvious even through the layers of clothing. “Want you. Need you,” he whispered.