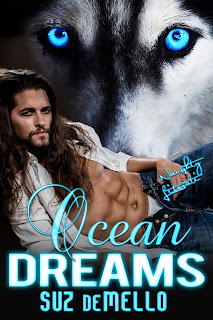 Blurb:
Marine biologist Sandi has never forgotten Blue, the baby dolphin with whom she bonded. Reunited with him years later, she discovers he’s a shapeshifter in the sexiest possible way.

...the first encounter between a dolphin shifter and his human mate.

She framed his face in her hands, thinking, I’m insane, but kissed him anyway.

He kissed back, a little hesitantly, and she thought, He’s never done this before. At least, not with a human. She was both scared and excited. She didn’t want to rush him, so she opened her lips just a tiny fraction.

He followed, and after their lips had melded and played, she opened a little more and allowed her tongue to gently touch his mouth. When he seemed accepting, she used the tip to tickle the sensitive inner lining of his lips.

He gasped and bucked against her, his substantial erection thrusting against her mound. She slid her hands down his back, finding a small hard lump near the spine. She wondered what it was, but chose to ignore it, instead dropping her hands to his hips. She pressed him against her more firmly while continuing to introduce him to deep kissing.

He moaned into her mouth and tangled one hand in her hair. The other stroked her face, then slipped downward, caressing her throat with respectful fingertips before palming her breast.

He’s never touched a human breast before me. He took his time, which wasn’t surprising, molding and cupping before he tugged up her pullover and found her bra. He explored it, the lace scratchy against her sensitized skin, then drew it aside to find her nipple.

Human nipples weren’t much like dolphin nips and he seemed quite interested, lingering long, circling the nipple. The flesh hardened, and an “oh” escaped his lips.

Intoxicating, the combined sensations—the kissing, the breast play and his cock against her mound. She was swelling along with him, dampening, ready. Very ready.
Posted by Nicole Austin at 12:00 AM