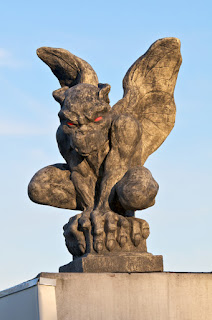 I recently finished my story for the next Naughty Literati anthology, Naughty Flames.  Like my story from last year’s winter anthology, it involves gargoyles. Because of the mythology I’ve established for gargoyles in my world, winter is about the only time I can do interesting stories for them since that’s the time period when they can assume human form. That works for me since I don’t want to limit myself to gargoyle stories but I do enjoy writing about them.

So, why do I like gargoyles so much? Beats me.

I’d like to leave it at that, but I’m a writer, so of course I have a few more thoughts and words about it.

What is it about gargoyles that makes them so fascinating? Maybe the fact that they’re just so very homely, and humans have an odd soft spot for the outrageously ugly. They’re kind of underdogs by definition. Except that we often picture them as strong, fierce, and able to fly. Yup, bit of a paradox there.

Because they often grace churches and large public buildings and are usually built high on the structure and shown facing outward, we tend to view them as guardians or at least lookouts. And there we start to get an interesting contrast, because if they’re guarding anything, they’re guarding the building, and by extension, us, the people who use that building. So they’re doing a service for us.

It’s kind of hard to figure out just what they’re guarding us against, but I suspect that line of thought could lead to another series of stories when I do start to get a glimmer of the dark side these creatures help to keep at bay.

For me, the contrast between an ugly exterior and a beautiful soul inside is one of the features that fascinates me. I guess it’s a Beauty and the Beast kind of archetype, with a heroine who comes to realize that looks are important, but they aren’t the most reliable mirror of the soul within.

Posted by Kate Kingston at 1:00 AM