Prep for NaNo with ABOUT WRITING: YOUR ESSENTIAL WRITING MANUAL by Suz deMello (@NaNoWriMo #NaNoPrep)

Plenty of writing manuals are available, but of course I think mine's the best, with Self-Editing For Fiction Writers a close second. I also found Stephen King's On Writing marvelous, but more for King's autobiographical musings than craft--though there are plenty of great craft tips in it. I'd also recommend Rita Mae Brown's Starting From Scratch.

But my subject is About Writing, and here's how this handy little writing manual can help authors prepare for NaNoWriMo--National Novel Writing Month. In case you're unaware of this event, November is the month when support groups help writers slam through the arduous job of writing a complete 50,000 word novel in one month--an enormous task, even when divided into thirty 1667-word increments.

The most important task for the NaNo writer is plotting. In this situation, it's crucial for the writer to know what twists and turns the plot will take. But plotting isn't possible without carefully defining characters and their conflicts, because conflict drives the plot.

Here's what About Writing has to say about this task: 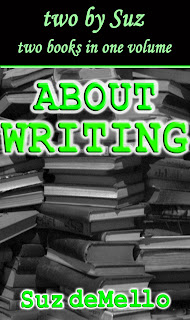 What are the building blocks of plot and story?

How important are these? Quite simply: No characters, no conflict. No conflict, no plot. No plot, no story. No story, no book.

It’s as simple and as difficult as that. Without characters with solid inner and outer conflicts, there’s no story, because your story is the journey that the characters travel to solve their conflicts. This journey may be physical, with characters actually going somewhere (Dorothy in The Wizard of Oz), or it may be emotional (Scout in To Kill A Mockingbird).

Diane Farr, a multi-published Regency and teen novelist says, “Conflict arises from character and plot arises from conflict. The most basic level is interesting people in an impossible situation.”

Plot and story should flow naturally from the characters and their conflicts. Otherwise, the story and the events in it will seem forced.