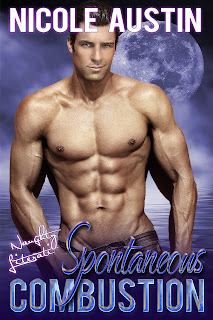 Blurb:
Maddy’s secret fantasies about Jake burn hotter than a wildfire but she’s not his type. With the help of his fellow firefighters, Jake intends to stoke the flames and prove to Maddy she’s the only one for him.
*This previously published title has been revised and reedited*

“Tell me your deepest, darkest fantasies.”


The words were breathed in a dark, husky tone against Maddy’s ear. Warm breath caressed her neck, raising the fine hairs at her nape and sending chills coursing down her spine.

She didn’t have to turn around, knowing instantly to whom that sexy baritone voice belonged. How she would love to provide explicit, graphic details of her most intimate fantasies for him. Or better yet, maybe they could act them out.

“Come on. Tell me, babe. What is it? Being bound to the bed, or maybe oiled up on a Slip N’ Slide? Do you dream of sweet love making, or hard fucking? One lover or several?”

“How much have you had to drink tonight, Jake?” she questioned, then gasped as he licked a hot, wet path along the ultra-sensitive skin behind her ear.

“Stop it,” Maddy squealed in protest. Of course, stopping him was the last thing she wanted to do. But giving in meant risking both heart and soul. She couldn’t stand the thought of being rejected by this man, the only one who really mattered.

Jake Cruise had been her best friend and neighbor since college. They had shared everything. Well, almost everything. She couldn’t share her true desires with him, could she? As if he’d ever want to have sex with her. He was such a tease.

Maddy gave herself a mental shake. What was she thinking? Of course she couldn’t tell Jake how much she wanted him. It would ruin their friendship. He’d think she was a freak if she shared her dark fantasies.

“Come on, Maddy. Tell me.” A pleading tone filled his voice.

“I don’t have dark fantasies, Jake. You know I’m a good girl.”

If Jake didn’t stop whispering in her ear, Maddy’s panties just might catch on fire. Heat surged through her blood, pooling in her swollen labia. Her panties were soaked with her creamy juices. At least she was in the right place to have the fire put out if she spontaneously combusted. Half the guys from the firehouse were scattered throughout the rowdy pub.

The train of her naughty thoughts was out of control. If she were the devout good girl her parents wanted her to be, Maddy would be spending a lot of time in the confessional, saying tons of Hail Marys. It certainly was a good thing her thoughts remained private. If anyone in her family knew the things that ran through her mind she’d be labeled a bad girl. Wicked. She was not a bad girl. She just had some debauched thoughts once in a while.

I am a good girl!

Well, most of the time. She’d been raised to be a good little Catholic girl. It was just her base carnal cravings that made her feel like a bad girl. Maddy had done everything she could to keep them suppressed. Good, intelligent girls just didn’t think about the things that haunted her mind late at night, many of them involving Jake and a few of their closest friends dominating her sexually.

Truth be told, Maddy had been in lust with Jake since the first time she had laid eyes on him across their quiet street. Standing in his driveway, he’d been wearing only a pair of red swim trunks while washing his pride and joy, a shiny blue convertible Corvette. Jesus, the man made her sweat. He’d looked like a shiny, bronzed god standing there, caressed by golden rays of sunlight.

If only I was his idea of a goddess.

But she was so not his type. Jake went for the blonde Barbie dolls with large breasts, impossibly thin waists, long legs, and low IQs. Maddy was far, far removed from that image. Her hair was shoulder length, fiery red and extremely curly. Her breasts, while pert and firm, barely filled out a C cup. She wore a curvy size fourteen, considered her legs to be only average, and held a Ph.D. Although she knew men thought her pretty, she could never measure up to one of the beauties that usually captured Jake’s attention.

“Come on, Red. You can tell your ol’ friend Jake.”

I want you, Jake. I fantasize about you all night, every damn night. Hard, fast, and dangerously wild fucking. I want you to take control, and lavish me with more pleasure than I can handle.
Posted by Nicole Austin at 12:00 AM