Excerpt from THE REVENANT'S DESIRE by Charlotte Boyett-Compo 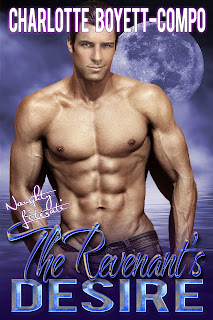 
Blurb:
A once-a-year visit to her lover may be enough to hold his demons at bay, but it can’t cure Alana’s loneliness on the other 364 days of the year.

Spanish moss hung from the darkened shoulders of the live oaks like the scraggly haircuts of withered old men. It swung violently in the wind and dripped icy water upon on the woman darting through the grove. Lightning stitched through the sodden midnight sky and lit the overhead branches in a strange, eerie blue-gray light. Underfoot, the ground was slippery and pitted with mud puddles from the rain. The air was filled with the scent of decaying leaves and something more sinister. The smell pebbled her skin with chill bumps, caused her shoulders to tense beneath the heavy raincoat she wore. She dared not stop but could not prevent herself from whipping her head around from time to time to make sure she wasn’t being followed.

Her destination was the Thibodeaux Plantation a half mile beyond. There—within the decaying walls of the old mansion and away from prying eyes—she would meet her lover. The portal would open at midnight and last until first light. It was imperative she get there on time, for her moments with him only came once a year on All Hallow’s Eve. Then that doorway between the realms opened. When specters and haunts and all manner of supernatural beings could cross over. Some good; most bad. To those who feared the spectral visitors, her lover was considered among the latter. There were among the human population a few who would destroy him if they could, so making sure no one was trailing her was vitally important.

She stopped to catch her breath and to surreptitiously look around her for just such a person. Drawing the raincoat tighter around her neck, clamping her teeth together to prevent them from chattering from the cold, she pressed against the rough bark of an oak tree and peered through the downpour. Nothing moved and she heard nothing save the falling of the rain upon the saturated ground. Nevertheless she held still to survey the forest surrounding her—keeping her ears cocked for any sound that did not belong. She kept her eyes peeled for any movement among the skeletal bones of the dark trees. Once satisfied she was alone in her trek, she pushed away from the tree to set out again—lowering her head against the cold invasion of the raindrops.

As she neared the boundary where forest gave way to a clearing dotted with overgrown weeds and crumbling outbuildings, she could hear the Kinchafoonee Creek rushing over downed trees and rocks. The smell of the water was pungent and brought with it that evil stench that had been plaguing her since she first entered the pine grove. She frowned deeply at that scent, for it spoke of things she hoped she would not encounter this night. Things best left buried deep beneath the Georgia red clay. In the distance, a lone hound bayed dissonantly and the hair on her arms stirred.

The portal was opening as the clock ticked toward the witching hour. Things were beginning to slip through. They would be floating around the old plantation house. Lurking among the pines. Slithering over the wet ground to ooze their way into the rotting foundation. Wafting through the cracks in the windows and flowing down the crumbling chimneys. Clawing at the floorboards.

Suddenly, lightning shrieked like a banshee across the firmament. The sky pulsed ghostly gray in its wake and the ground shook as the bolt struck somewhere to the south of where she ran. Something had come out of the clouds. She sensed it, felt a spectral finger scrape down her spine and knew she had to hurry.

He would be there waiting for her with his arms open wide. He would keep the evil that now shadowed her at bay.

Tripping over the uneven ground—her fingers growing numb from clutching so fiercely at the closing of her raincoat—she could not stop the whimper of fear from escaping her throat. The malevolence was quick on her heels and closing fast. She had to reach the relative safety of the plantation before it reached out its wicked talons to grab her.

It was his soft, deep voice she heard in her mind. She could feel his worry, his unease.

Quickly, my love. He is gaining on you!

“Who is he? What is he?” she asked aloud as thunder rolled brutally overhead.