The Surfer and the Bad Boy: A free read for you!

The Surfer and the Bad Boy

Wade jumped off his surf board and splashed through the shallow water onto the sand. He stood right on the edge of the ocean shaking the water out of his hair, relishing the burning hot sun on his shoulders, and squinting his eyes against the glare to see along the top of the sand dunes.
Yes. He was right. The big, black-haired bad boy was still standing there, and still staring right at him.
Wade shoved a hand through his hair, scraping the last of it off his face, and using the action to focus even more on Bad Boy. Damn, the man was delicious. Built. Oh, how he was built. Broad shoulders, thickly muscled biceps, and washboard abs clearly visible through his unbuttoned leather vest. Everything Wade liked best all packaged together with so much attitude he could almost taste it across fifty feet of sand. Somehow Bad Boy didn’t strike Wade as the usual kind of person who watched surfers. Apart from the beach bunny women who drooled over toned male bodies, most of the rest of the viewers were fascinated by the surfers’ action on the waves. But Bad Boy seemed different. It was almost as if he was looking right inside Wade, measuring his innermost self.
Despite the scorching sun Wade shivered. Huh. He must be imagining it. Obviously he’d used up too many calories out on the water and his blood sugar was too low. A beer and a couple of hot dogs would solve that problem.
Wade strode up the dune to his truck, ripped open the Velcro ankle tie and hefted his surfboard into the truckbed, laying it on the old blanket he always kept there. His board was the best he could afford and he didn’t want it damaged.
“Niiiice,” rumbled a very sexy deep bass voice right behind his ear.
Wade whipped around. Bad Boy was standing an inch away from him. How had he gotten here so silently? Hastily he took a breath and replied. “It’s a Christenson. Chris shaped it for me personally.”
“I meant you, not the board, although it’s okay I guess.”
“Okay? Just okay? It—” Wade snapped his mouth shut and tried to stem his anger. That damn board had cost him a shitload of money and it was damn-near perfect. In fact, not even damn-near. It was perfect. Wade forced himself to take another breath and that’s when he saw the sparkling light in Bad Boy’s black eyes and realized he was being teased. Also, Bad Boy had complemented him. As if his physique was anything like as awesome as Bad Boy’s.
“My name’s Wade.” He stuck out his hand.
“Killian. Good to meet you, blondie.”
Killian’s hand was rough as if from hard physical labor, his grip firm but not bone crushing. And his voice was every bit as sexy as the first time he’d spoken.
“You’re interested in surfing?”
“A little I guess. Mostly I’m interested in you.”
“Me?”
Bad Boy gripped Wade’s hand more firmly and Wade stared at their hands, surprised that the clasp was somehow erotic rather than formal. Killian’s hand was as tanned as his own, but larger, firmer. A vision of that hand spanking his ass shot through Wade’s mind and he almost drooled with lust. Wow. He really needed to get his head on straight before he said or did something stupid.
“It’s too damn hot out here. Let’s go get a beer somewhere air conditioned.”
A beer sounded good to Wade. “I was just about to get some lunch as well. There’s a great hot dog stand just along the bluff. No air conditioning though.”
Killian finally let go of Wade’s hand and slapped him on his shoulder. “As long as I can get out of the sun I’ll survive.”
Wade grabbed a towel and his flip-flops out of the truck, grinning at the horrified look on Killian’s face when he slipped his wet, sandy feet into the plastic footwear. “Normally I go barefoot but sometimes there’re bits of metal or glass up near the road,” he explained.
“Flip-flops? Seriously? Real men don’t wear flip-flops.” The bass rumble was every bit as horrified as the look on Bad Boy’s face.
“Bare feet are my thing. Really.” Wade led the way to the hot dog stand, waving at the owner and holding up two fingers. The kid waved back and handed him two fully loaded hot dogs, then pulled two ice-cold longnecks out from under the counter. Wade carried them across to a table under an umbrella where Killian was sitting in the shade. Wade handed over a hot dog and a beer to Killian, placed his own food on the table, then dropped his towel onto the chair before sitting down.
“It’s plastic. It doesn’t matter if you get it wet.”
“I know, but some of the chairs are metal and I don’t need a burned ass.” Even as he said the words the image of Bad Boy’s big hands spanking him shot into his mind again and he swallowed hard. What the fuck was wrong with him? He didn’t even know this man.
Rushing to change the subject he asked, “Are you just here for the Fourth of July holiday? The fireworks won’t begin until ten tonight. Sunset is close to nine and it’s not really dark for half an hour after that.”

Killian stared into Wade’s eyes. They were the dark blue of the ocean near the horizon. A deep, penetrating color that rocked him all the way to his core. He’d started off by watching the way blondie surfed. His body moved on that board like a dancer over the waves. The sea appeared to part to let him though, offering him a smooth, graceful ride all the way into the shore. But the closer the surfer came to him, the more Killian could see the sheer muscular strength that held Wade’s body in pace. Arms outstretched for balance, legs braced to turn the board as the waves rolled by, all in complete balance and harmony. Fuck yes, blondie made it look so easy but Killian knew that was totally deceiving. If he tried to do it he’d fall off the board in ten seconds and likely break half the bones in his body as well. And that was if he didn’t drown. No. Surfing took skill, balance, precision, toughness of body and mind. All characteristics that turned him on, and blondie here turned him on in spades. It took everything in him not to slam Wade face down on the table and fuck him. Or maybe throw him to the ground and suck his cock until he screamed and begged for more.
Killian swallowed hard. “I’m here to watch the fireworks with you, and then we can make some fireworks of our own. Private ones.” He kept his gaze fixed on Wade as he spoke, watching the gleam in those blue eyes, the smile tilting the edges of his mouth up at the corners, the faint blush spreading across blondie’s tanned face.
“Fireworks huh? That sounds like the kind of plan I could agree to.”
“In that case I’d better get us each another hot dog. We’re going to need the extra calories.”
Wade grinned. “Better pick up a couple of apple pies as well for the sugar hit.”
Killian’s breath hitched. Fuck waiting for tonight. He jumped to his feet and pulled Wade against him, lowering his mouth for a kiss. Wade’s lips were soft and salty, then hard and passionate. Absolutely perfect. 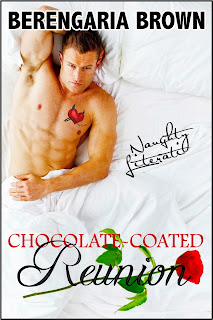 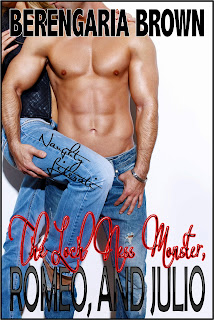 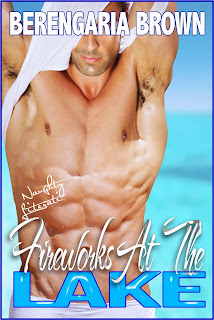 Posted by Berengaria Brown at 12:34 AM