It was a Pleasure to Burn...

It's September. For me that means my thoughts turn to Banned Books Week. In my day job, I work as a librarian and this is a real issue every day.


What does that mean for a book to be banned or challenged? It means that someone somewhere thinks that they know what's best for you. For your children. For your grandchildren. A challenged or banned book has language, or a message, that some find controversial and they want it gone, regardless of views. So they go to a library or a bookstore and tell them, "Take that filth away! It shouldn't be where children or impressionable people can see it."

But what's the filth that's so terrible? Communism? Fascism? Sexuality? Witchcraft? Or could it be the Bible itself? The Communist Manifesto, Mein Kampf, 50 Shades of Grey, Harry Potter and yes, even the Bible have been challenged and in some cases removed from book stores or public and school libraries. But what's the big deal? It's just book, right? Nope. It's not just a book.

Ray Bradbury made that plain in Fahrenheit 451. A fable about a society where firemen don't put out fires, they start them. With books. The main character says... 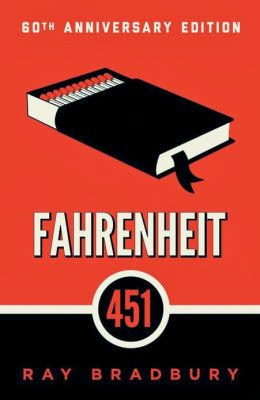 "Last night I thought about all that kerosene I've used in the past ten years. And I thought about books. And for the first time I realized that a man was behind each one of the books. A man had to think them up. A man had to take a long time to put them down on paper. And I'd never even thought that before."

"It took some man a lifetime maybe to put some of his thoughts down, looking around at the world and life and then I come along in two minutes and boom! It's all over."

Can you answer that question? I can. I get bothered every time I turn on the news these days. I see far too many things that Bradbury suggested might happen in his book. Far too many are painfully real now. So what's the point? The point is memory. Each year, when Banned Books Week is celebrated, we're tasked to remember. This annual event celebrating the freedom to read, highlights the value of free and open access to information and condemns censorship.

It encourages readers to think. We should read that controversial book, because if we don't, someone may decide we don't need to and then it will disappear.

Banned Books Week brings together the entire book community –- librarians, booksellers, publishers, journalists, teachers, and readers of all types –- in shared support of the freedom to seek and to express ideas, even those ideas that some consider unorthodox or unpopular. Even ideas that some consider...dangerous. Thus, this event is about democracy and the importance of the first amendment to the Constitution.

By focusing on efforts across the country to remove or restrict access to books, Banned Books Week draws national attention to the harms of censorship. This special week was launched in 1982 in response to a surge in the number of challenges to books in schools, bookstores and libraries. Since 1982, more than 11,000 books have been challenged. And that's why this event is important to all.

Many books that are challenged say that the challenge was because a book was "unsuited to age group" -  which means that someone wants to censor books for children and young adults.

Now, I'm not saying an individual parent should be prevented from deciding what his/her child reads. No, just the opposite. A good parent involves him or herself in the child's reading choices. But just because you don't approve of a book for your child does not mean you should tell your neighbor that their child can't read that book either. And that's what a challenge is about, right at the base of it. I don't approve so you don't get the right to decide for yourself.

I don't know about you, but I want the right to evaluate a book or an idea for myself. I may agree with the person who labels a book "trash," or I might not. But it's up to me to decide and I like it that way. I want to think for myself. Read for myself and then conclude what I think, and not what I'm spoon-fed by others.

It comes down to democracy. Democratic ideals of one person, one vote. Of each of us determining the value of something for ourselves. And I'd like to close with one of the best definitions of democracy and free speech I've ever heard. It comes from an unlikely place, but good ideas often do. This definition was passionately expressed by President Andrew Shepherd in the romantic comedy, The American President. "America isn't easy. America is advanced citizenship. You gotta want it bad, 'cause it's gonna put up a fight. It's gonna say "You want free speech? Let's see you acknowledge a man whose words make your blood boil, who's standing center stage and advocating at the top of his lungs that which you would spend a lifetime opposing at the top of yours. You want to claim this land as the land of the free? Then the symbol of your country can't just be a flag; the symbol also has to be one of its citizens exercising his right to burn that flag in protest. Show me that, defend that, celebrate that in your classrooms. Then, you can stand up and sing about the "land of the free".

And that's what Banned Books Week is all about. Exercising your freedom of speech and your freedom to read. It's that simple.


Posted by Francesca Hawley at 4:00 AM