Excerpt From BACK IN YOUR ARMS by Marianne Stephens 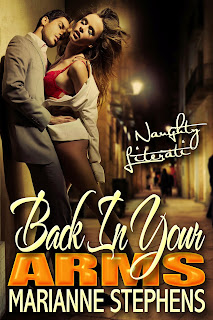 Blurb:
Liz blames Brian's family for the loss of her family's Inn. Seeking revenge, she contracts Brian to restore it. Will rekindled love spark between them?
Genre/theme: Contemporary, second chances

Lilacs. She couldn’t help a smile that formed on her face as she marveled at how Brian remembered the scent. It was her favorite and one she now used in scented shampoo and soap. Thoughts of Brian and how his touch had heated her skin raced
through her head.

Would an affair, quick and satisfying, quiet her desires? Could she walk away later?

She scrubbed her skin, trying to convince herself that making love with Brian after all these years would squash any fantasies looming in her brain. Determined to keep control no matter how much her heart urged her to reconsider her plan to leave once the Inn was completed, would be a goal. All she desired was fast and furious sex. Something to satisfy her needs. Like when they were lovers before she’d left town.

Confident that her emotions were safely under her control, Liz dried off, dressed, and headed down to the kitchen to have dinner.

She stumbled slightly as she entered the room. In a flash, Brian raced from his place near a counter and grabbed her, effectively gathering her in a bear hug.

“You okay? That rug has a small knot in it and sometimes people trip on it.” Brian tightened his grip.

“My fault. I was supposed to fix the damn fringes and uncurl the knot.”

Liz relished being held so closely. Brian’s woodsy scent sent her mind reeling, and all she wanted to do was hold onto him for as long as possible. Pressed so tightly against him, she could feel his chest muscles crushed against her breasts. Her nipples reacted and immediately beaded.

One of his hands splayed against her lower back, covering a spot just below her jeans waistband. Liz realized that both of them were breathing fast, a sign that always spurred them into a more intimate position in the past.

“I’m fine,” was all she could mutter. The almost-fall forgotten, Liz had other things requiring her attention. Like one of his fingers slipping under her waistband. She pushed further into him, wanting more heated contact.

Brian wiggled his finger against her skin and dampness settled in her panties. One touch, one enormous hug was enough to melt away any lurking reservations. The hell with dinner. She wanted him.