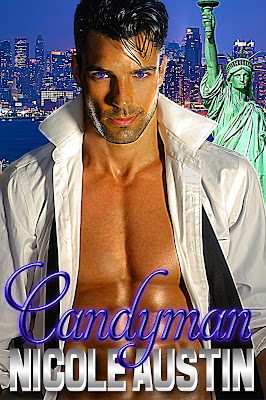 Here it is, the fabulous (if I do say so myself) cover for Candyman. I am thrilled to have this reverted Ellora's Cave title revised, re-edited and going live again.

Blurb:
Elisa Wilde’s recurrent dreams transcend time and place. Dreams so real they seem to be actual memories of a bygone era. Driven to unravel the mystery and reclaim her life, she’s drawn into an amazing adventure.

In a tragic twist of fate, Michael Claret lost his truelove. He has waited decades for her return, but getting her back is only a small part of the battle. Edie has changed, evolved into a different woman. Not only will Michael have to once again win her heart, he must also gain her acceptance of his true nature. And to keep her requires she make a huge leap of faith by completing the mating bond—a sharing of blood binding them together for eternity.

Fate is a cruel mistress who will not be cheated or denied. To make the most of their second chance, Michael and Lisa must alter the path chosen for them, and rewrite their love story or be lost to each other forever.

*This previously published title has been revised and re-edited*

Lisa wanted to laugh as she listened to a group of women seated at a large table ordering fancy drinks with sexy names. Foreplay, All Night Long and Kinky Orgasm were a few of her favorites.

Shan found two empty stools at the bar for them. After several minutes, they were approached by a harried-looking bartender, flamboyant mannerisms and a gay pride T-shirt advertising his sexual preferences.

“A Slow Comfortable Screw with a twist,” her sister stated.

His attention turned toward Lisa. “What would you like, hon?”

Her mind wandered to the earlier visions of frantic sex with Michael, and her devilish muse became inspired. What the hell, he’d asked what she wanted, and he was blatantly gay so there was no danger of his thinking he could provide what she desired. She might as well tell him in explicit detail.

“I want a hard, deep, raw fuck against the wall, with multiple screaming orgasms, followed by the inability to walk straight for days.” She flashed him a wicked grin.

The bartender breathed heavily and Shan moaned. “Dayum, sis. Umm…I changed my mind. I’ll have what she’s having.”

“You and me both, sugar. I’ll let you know when I find someone capable of filling that order. In the meantime, you’ll have to choose something contained on the shelves.”

Lisa relented, ordered a glass of merlot, and turned to take in the room. The brief verbal play lessened some of the tension and allowed her to relax, if only slightly.

The band sounded hot, and quite a few members of the audience were dancing. Everyone appeared to be having fun. She received flirtatious glances from several men, but she didn’t offer any encouragement. Whether a simple case of nerves created the gut reaction or an actual case of intuition, she had the sense of sitting on the precipice of a life-altering event. Something big would happen tonight and she felt almost certain it would be tied in to the memories.

Shan and she were both asked to dance by several men and her sister took several up on their invitations. Lisa felt too strung out to dance, and politely declined all advances. Her thoughts shifted to performing.

She planned to sing tunes from now grown-up teeny-bop pop artist Christina Aguilera. Her album, Back to Basics, featured old-school style jazz, blues and soulful songs with a modern flair, along with a few sexually charged tracks that were perfect for the occasion.

Lisa would start with Save Me from Myself, a sultry, soul-inspired song that fit the forties feel she hoped to achieve and yet was still contemporary. The band had insisted she have an encore song prepared and told her in no uncertain terms that if the audience didn’t demand another number, the musicians would.

To make them happy, she decided on Candyman. The dirty and playful song would liven up the mood and get everyone interested in dancing again, hopefully saving her from singing anything else. While she enjoyed singing, she was self-conscious about doing so on stage under the bright spotlights.

At a signal from the bandleader, she headed backstage. She’d have ten minutes to prepare before being called out on stage. She paced the confines of a small dressing room going over the lyrics in her mind until the bar manager knocked and peeked in the door.

Taking note of the state she’d worked herself into, Sam moved to her side. “Whoa, honey. It’ll be all right.” Clasping her shaky hands in his own, he rubbed some warmth into her cold flesh and talked her through some calming breaths.

“I heard you sing earlier. You’re going to wow them, Lisa. Hell, if it makes you feel any better, there’s no way I’d let you on my stage if you sucked.”

As he’d intended, she laughed. “Jeez. Thanks, Sam. I’m not sure if that’s a compliment or not, but I’ll take it.”

“You’re gonna knock ’em dead, honey.” He brushed a friendly kiss over her cheek. After walking with her to the edge of the curtain, he nodded to the band. They finished the current song and the bandleader drew the patrons’ attention.

“Ladies and gentlemen, Top Hat and Old Town Tavern are proud to announce that author and vocalist extraordinaire Elisa Wilde has humbly agreed to honor us all with a song tonight. So please, put your hands together and give a big welcome to this phenomenal lady.”

Oh crap, no he didn’t. How the heck would she live up to the effusive introduction? Her tummy flip-flopped as Sam walked her out onto the now darkened stage, held her waist, and set her atop the piano. A sense of déjà vu hit her as he handed her a cordless microphone then squeezed her hand.

In a flash, she was thrust back into the memory of Edie singing on a nearly identical stage. Grateful for the vision, she followed the other woman’s example and lay on her side.

Then something truly magical occurred. Upon opening herself to the magic, Lisa felt Edie’s spirit take over and she melded with the other woman. After a series of sensual moans and a sexy hiss, she sang the first verse. The pianist accompanied her for the second. A spotlight came on, illuminating her silhouette. With the third verse, the vibrating strum of a guitar joined in. The brass section chimed in with the fourth and the lights rose slow and steady along with the music.

As she gazed out over the audience, their rapt attention boosting her confidence, her eyes landed on a man who stood apart from the crowd.

Oh God. It was him. He was real. The man who called to her in ways no other ever had. She’d wanted him for what seemed like forever, loved him her entire life, but nervous jitters assaulted her from actually being near him.

Her pulse elevated, blood roared in her head, and her body zoomed from zero to hot-and-ready in the space between one heartbeat and the next. And she had no doubt this glorious man would be exceedingly capable of filling the order she’d jokingly placed earlier at the bar.